Abraham Ancer hit with "RIDICULOUS" penalty at The Masters

Golf fans were in debate after Abraham Ancer was given a two-stroke penalty for an incident in a bunker at Augusta National. 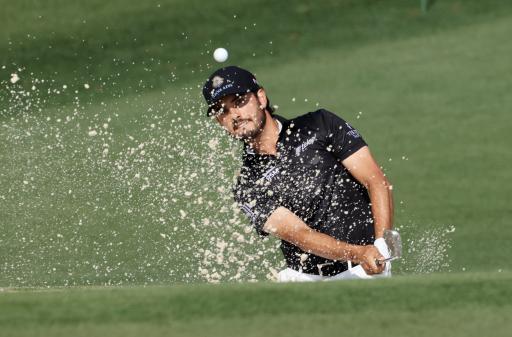 Abraham Ancer was given a two-stroke penalty after his opening round at The Masters on Thursday and it caused a widespread debate amongst golf fans, with many labelling it "ridiculous".

The Mexican, who shone throughout The Masters back in November, shot a very respectable 1-over par opening round, which given the difficulty of Augusta on Thursday was a score that Ancer would have been more that satisfied with.

Later that day, Ancer was informed that he had been given a two-stroke penalty for grazing the sand in a bunker at the par-5 15th and improving his lie, turning his bogey into a triple bogey and his 1-over par score of 73 became a 3-over par 75.

Ancer now goes into Friday's second round 10 shots behind leader Justin Rose and he took to Twitter to share the news about his penalty, which caused a serious debate on social media.

WATCH ANCER'S BUNKER INCIDENT IN THE CLIP BELOW:

I was just informed that I have been assessed a 2 stroke penalty for unintentionally grazing the sand in my backswing on hole 15. While I’m gutted, I can’t wait to get after it tomorrow. pic.twitter.com/5ZOlthQzeE

"I was just informed that I have been assessed a 2 stroke penalty for unintentionally grazing the sand in my backswing on hole 15. While I’m gutted, I can’t wait to get after it tomorrow," Ancer said on Twitter.

Although Ancer technically signed an incorrect scorecard, as he was unaware of his rules infringement, he was not disqualified, but given a penalty.

Ancer had left the scoring area, but video evidence was reviewed by the committee and the decision was made to hit the 30-year-old with a rather controversial penalty.

“The touching of the sand was deemed visible to the naked eye,” the statement read. “Had this not been the case, the video evidence would have been disregarded and a penalty would not have been applied.”

Once Ancer had posted a video of the incident on social media, golf fans began debating in the comments section. Some were gobsmacked that officials had decided to penalise Ancer, while others strongly felt it was the right decision.

You pressed the sand down prior to your backswing so it wouldn’t get between the club and the ball. You knew it. You got caught. Own it.

Before shot the club appears to flatten small bit of sand. Would be confirmed on replay. Rules are rules.

I’m sure you’ll have a few rules honks on here saying “rules are rules”, but that’s friggin ridiculous.

They’re splitting hairs here - why the vendetta against you

It’s ridiculous. Penalties are enforced in sports for doing something that secures an advantage. Nothing here remotely rises to that level.

sorry to see this because it's not how the rules should be enforced.

How do you not see it at the end. Look at the sand before his last waggle and after. pic.twitter.com/VyT7gZEfuU

NEXT PAGE: Jordan Spieth reacts to his "VERY LUCKY" eagle during Masters opening round