Bryson DeChambeau struggles off the tee but remains in Masters contention

DeChambeau has a day to forget off the tee but is still in contention for his first Masters title... 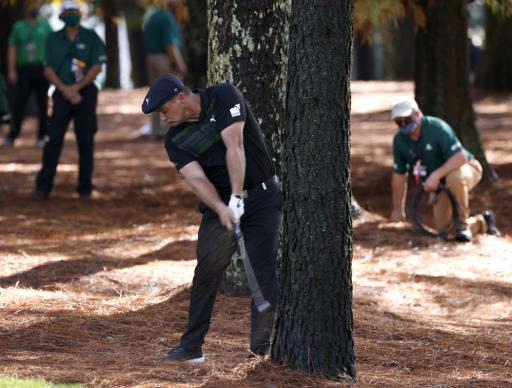 Bryson DeChambeau's driving might not quite have lived up to the hype on day one at The Masters, but the American has still kept himself in contention for a first Green Jacket.

DeChambeau, who is bidding to become the first player since Jordan Spieth to win consecutive major tournaments in a season, birdied the final hole to post a 2-under 70 in the morning wave of groups.

Trouble off the tee for Rahm and DeChambeau at the 11th!

He then sent his tee shot way left into the trees on the 11th and was fortunate to find it in the pinestraw and go on to make a par.

Disaster struck from him at the par-5 12th when he sent his second shot into a bush. A penalty stroke and a duffed chip later, and DeChambeau was suddenly 2-over par and well down the pack.

But he recovered well from there with birdies at 15 and 16 to go out in level par, and he then returned with three birdies and a bogey on his inward nine (the front nine) to finish the day on 2-under par.

That currently leaves DeChambeau five strokes behind early pacesetter Paul Casey, who fired a flawless 7-under 65 to equal his lowest ever round at The Masters.

Webb Simpson and Xander Schauffele both continued their solid form of late with rounds of 67 to lie two strokes behind Casey.

Tiger Woods has given himself every chance of defending his Green Jacket and landing a sixth Masters title - that would match that of 18-time major record holder Jack Nicklaus - following a superb round of 4-under 68.