Woods trails by three strokes after posting his joint best opening-round score in his Masters career... 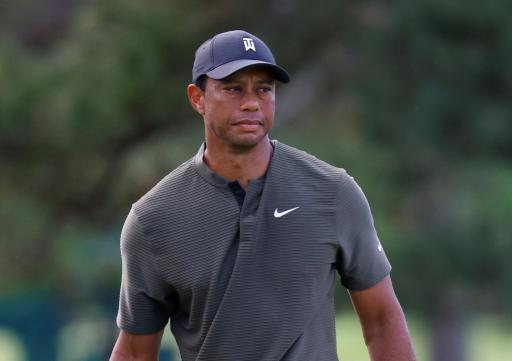 Tiger Woods carded his joint best first-round score in his Masters career on day one at Augusta National with a solid 4-under 68.

Woods is bidding to defend his Green Jacket this week and attempt to win a joint record sixth Masters title to match the feat of Jack Nicklaus.

Using the slopes. Tiger Woods birdies No. 16 to reach -3 at #themasters pic.twitter.com/TZlWyHTWg8

The 15-time major champion's opening round score of 68 also marked his first bogey-free round in his last 106 rounds in a major.

"I put a lot of it together today," said Woods.

The former World No.1 certainly did that on a low-scoring day at The Masters on Thursday.

Woods, who started on the 10th hole, took care of the par-5 holes on the back nine with birdies at 13 and 15, and very nearly followed that up with a hole-in-one on the par-3 16th as he tapped his ball in for a third birdie in four holes.

From there, Woods played steady golf at 17 and 18 with pars, before adding a fourth birdie of the day at the par-4 1st hole from inside of 20 feet.

Woods had several chances to add to his tally coming home, especially at his final hole, the par-4 9th when narrowly missing from inside of 10 feet, but the American settles for a 68 to lie just three strokes off the pace after day one.

England's Paul Casey is out in front on 7-under par after posting his lowest ever first-round score in a major, and his joint best ever score at Augusta National.

Justin Thomas progressed to 5-under par in his first round after just 10 holes before darkness forced a suspension of play. That score was already posted earlier in the day by in-form American duo Webb Simpson and Xander Schauffele.

Woods is joined on 4-under par with a host of big other names including former Masters champion Patrick Reed, Japan's Hideki Matsuyama and England's Lee Westwood.

Matthew Wolff, Adam Scott and Dylan Frittelli are also 4-under par and still have their back nines to complete when they return on Friday morning.

World No.1 Dustin Johnson is on 3-under par after just 9 holes.

NEXT PAGE: BRYSON STRUGGLES WITH THE DRIVER BUT REMAINS IN CONTENTION

Previous
Bryson DeChambeau struggles off the tee but remains in Masters contention
Next
Golf Gym Sessions: Gain Distance Over Lockdown By Improving Your Fitness