Tiger Woods gets off to incredible 1-under par start at The Masters against all the odds - and he does it all in a bright neon pink Nike Golf shirt. 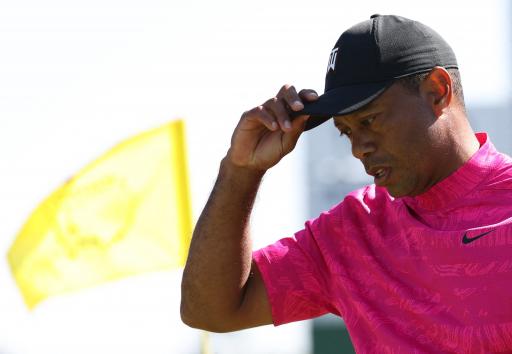 Tiger Woods stunned on his comeback return at The Masters with a superb 1-under par 71 in round one of golf's first major of the year at Augusta National - and he also raised eyebrows with his choice of shirt.

Woods, who nearly died in a car crash little more than 13 months ago in Los Angeles, produced an incredible return on day one of The Masters in a bright neon pink Nike Golf mock shirt.

The 15-time major champion finishe day one in a tie for 10th.

Woods opened his account with a birdie at the par-3 6th when nearly making a hole-in-one, but he would hand that shot back with a disappointing bogey at the par-5 8th when he was just short of the green in two shots.

He put that right with a two-putt birdie on the par-5 13th but would hand it back when missing a short par putt on the 14th.

But as we have seen many times down the years, Woods never gives in and he got back in the red numbers on the famous par-3 16th when curling a beautiful 20-footer into the bottom of the cup.

Woods then got up and down from shy of the green for par at the last hole to seal a memorable 1-under par 71 that it is fair to say many people never thought would happen.

The former World No.1 was priced up at 80/1 at the start of the week and he is now priced up at 40/1 as he looks on from just four shots off the pace set by Sungjae Im after 18 holes.

Can Tiger do the unthinkable and match Jack Nicklaus' record of six Masters titles?

We would not put anything past Tiger, especially after what we saw on day one.

Here's how golf fans reacted to Tiger's hot pink shirt in round one of The Masters: