Gary Player spoke about Phil Mickelson after getting The Masters underway. 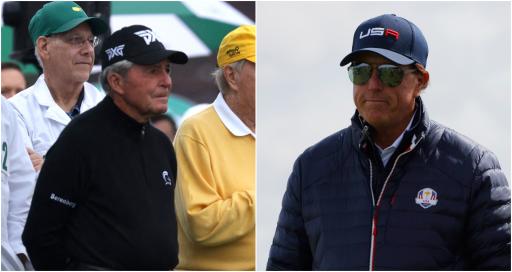 Gary Player sought to defend Phil Mickelson after he got The Masters underway with Jack Nicklaus and new honorary starter Tom Watson.

Player reckons Mickelson ought to be welcomed back into the golf community after his comments and dealings with Saudi Arabia as he sought to establish a new golf league with Greg Norman.

It was revealed this week that Lefty informed Augusta National chairman Fred Ridley by text message in early March that he decided not to play The Masters for the first time in 28 years.

There was speculation that he was advised not to show up but Ridley said in his press conference "we did not disinvite Phil".

Player, 86, told the media: "I have a special thought on Phil Mickelson. I think we live in a time now when we are such a judgmental society, a litigious society, a critical society, where people get crucified.

"The greatest PR man on the golf Tour in the last five or X amount of years has been Phil Mickelson. He has been the ideal man for a sponsor, for professional golf, for the public, the way he's handled the public, with dignity and with love.

"And he makes a mistake, which every one of you in this room have made a damn mistake. We all have. And he said he's sorry. But even the Lord God will forgive you of your inequities if you ask for forgiveness.

"It's amazing. From the epitome of perfection, he's down there being crucified. It's not right. That's my opinion."

Player captivated the patrons as he got the 86th Masters underway and made solid contact with the ball. What else would you expect from Player?

There was also some good jesting by new boy Watson who asked Player: "How far d'you hit it, Gary?!".

It also did not escape the attention of golf fans who noticed Player had a Golf Saudi logo on his traditional black jumper.

Do you agree with Player? Should Mickelson be given a second chance? Will he return to golf this year?

Bryson DeChambeau earlier this week said Mickelson had "gone dark" and was not responding to phone calls.