Harry Kane eager to fit The Masters around England duties

England striker Harry Kane is hoping to watch as much of this year's Masters as possible, although he will miss part of the final day's action due to a fixture against Belgium. 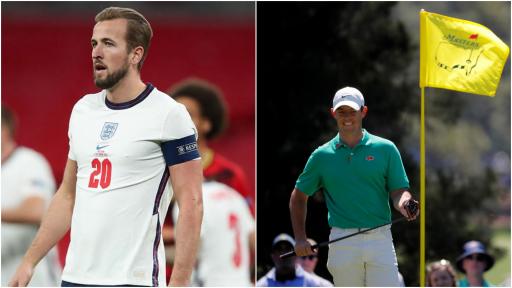 England striker Harry Kane has revealed he will be watching as much Masters action as he can this week, but will miss some of the action on Sunday as he has a Nations League fixture against Belgium.

Golf fans around the world are eagerly anticipating the first ever November Masters and Kane, who spends a lot of his spare time on the golf course, can't wait to watch the action at Augusta.

England take on the Republic of Ireland in a friendly on Thursday, before heading to the King Power Stadion At Den Dreef to face Belgium on Sunday night, right when the final round of The Masters will be heating up.

Speaking to Sky Sports News, Kane said: "I can't wait to be honest. It's going to be strange seeing how the golf course sets up in November.

"We're away with England at the time so I think I might be missing the final day - we're playing Belgium on Sunday but I'll be watching as much as I can.

"It will be an interesting watch. Hopefully some of the English boys can do well and get right up that leaderboard."

Kane is looking forward to watching Tiger Woods defend his title after his epic victory in 2019, but believes fellow countryman Tyrrell Hatton is in with a shot of winning his first major.

"I obviously love to watch Tiger - when he won it last year, it was amazing," added Kane. "It'll be good to see him back out there.

"Ian Poulter's obviously missing that major but he's had a great career. I'd love to see one of those boys do it."

NEXT PAGE: The Masters: How To Watch Live Coverage Of The 2020 Masters At Augusta

The Masters
GOLF QUIZ: Can you name the last 30 winners of The Masters?
PGA Tour
LEAKED: Tiger Woods and Rory McIlroy's text conversation after RIPPED SHIRT!
PGA Tour
Bubba Watson asked 'the Lord to take him' at lowest point of mental health
The Masters
Tiger Woods: Betting odds of big cat WINNING the 2022 Masters have been listed
PGA Tour
Study shows THREE-PUTT PERCENTAGE difference between The Masters and PGA Tour