The Masters 2021: Golf fans react to the first major of the year

Golf fans had their say on whether what they thought of the 2021 Masters, with some revealing they found it "boring", while others were glued to their seats. 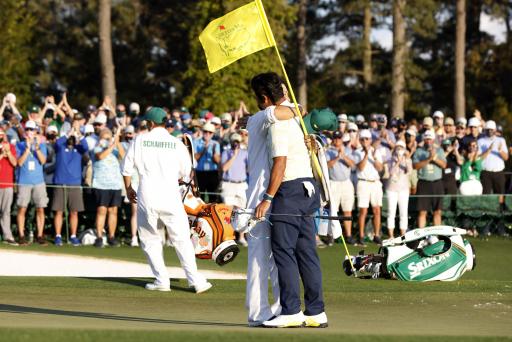 The first major of the year came to an end on Sunday and after Hideki Matsuyama claimed his first major title at Augusta National, we asked golf fans what they thought of the 2021 Masters.

There's no shying away from the fact there the final round lacked the big names that we are used to seeing battle it out on a Sunday at a major, but there was still plenty of action that kept golf fans watching.

Matsuyama's rather healthy lead looked in trouble when he went for the par-5 15th hole in two, only to see his ball bounce through the back and into the water.

The 29-year-old did well to escape with a bogey, but with Xander Schauffele making his fourth birdie in a row, the gap suddenly closed to just two.

The closing holes would have been far more exciting had Schauffele not put his tee shot in the water at the par-3 16th and walked away with a triple bogey, but there was still the possibility that Masters debutant Will Zalatoris was going to have his say.

Matsuyama made another two bogeys in his final three holes, but he held on to claim a one-shot victory and make history, as the first Asian-born golfer to win The Masters.

Defending champion Dustin Johnson was all smiles during the green jacket ceremony, but the World No.1 will be extremely disappointed with himself for not even making the cut, but what did golf fans think about the tournament?

We posed the question on social media, asking our followers what they thought of the 2021 Masters tournament and it got some rather interesting responses. Some absolutely loved it and some thought it lacked excitement due to the high profile names missing from the top of the leaderboard.

At GolfMagic, we love watching The Masters no matter who is contending and seeing Matsuyama make history was thoroughly enjoyable, but take a look at some of the responses we had from golf fans below.

"If you think it was a dud because the “big names” weren’t battling for the win, then you’re a fringe golf fan. And that’s okay. In my opinion, it was great to see 3 players that have never won a major battling it out for their first win. The global effect of having Hideki win was legit as well. Great Masters!" said Steve Fetter.

"Great to see the Masters in its proper time slot. Disappointed with the greens though, love seeing the pros battling against the lightning quick greens. I realise nobody can control the weather but Augusta did water them Friday morning (after a downpour) and they do have the use of drying machines. Still a fantastic spectacle though and great to see some fans in," said Phil Laycock.

"Thought Hideki did great to win but was a bit boring as no one was really making it interesting apart from Xander, then he ruined it all by dumping one in the water, love the masters but that wasn’t the best due to everyone going the wrong way," said Dave Gell.

"It was a good Masters but the lack of world's top players either missing the cut or making up the weekend numbers made it feel flat on the last day. Not having it full of patrons also contributed to it as well. Hideki played well and won it on the Saturday and his achievement will do wonders for the game," said David Terry.

"Boring, just didn’t feel like the masters (if you know what I mean) but hey ho, move on, British Open to come, hopefully that’ll be more exciting," said Vinny Suggitt.

"Golf wise it was great, course played very hard and “easy” at times and birdies and triple bogies could be made on the same hole, but coverage was poor in my opinion, with too many commercials, studio analysis, old replays etc... not much actual golf," said Ian Crawley.

"Lots of top players in the world folded up like a cheap lawnchair. I would have liked to see JT, DJ, Rahm, etc. battle it out on Sunday," said Lou Madray.

"He deserved it on that devastating third round performance to be fair. But as the tournament goes? Some of the pros had a shocker. Even DJ wasn't a shadow of the November player. Overall though, having watched 90% of the television coverage I enjoyed it. On the negative front. My one whinge would be at the BBC losing the golf coverage to Sky was bad news. I'm sure I wasn't the only person who got fed up with all the advert breaks," said Andrew Rob Smith.

NEXT PAGE: Hideki Matsuyama earned $7,446 PER SWING at The Masters