Hideki Matsuyama earned $7,446 PER SWING at The Masters

Hideki Matsuyama became the first Asian-born winner of The Masters and the first male Japanese golfer to win a major title. 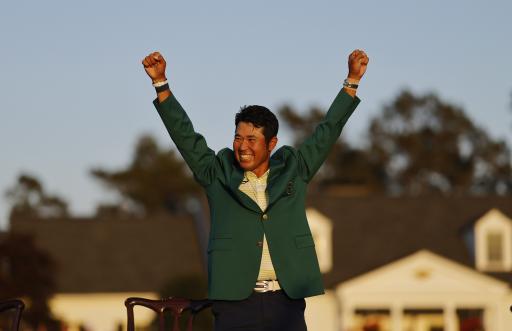 Hideki Matsuyama earned a staggering $7,446 for each shot that he played at The Masters, as he won his first major championship at Augusta National on Sunday.

According to research conducted by William Hill, the total purse at the tournament was $11.5 million and Matsuyama earned $2,070,000 for claiming his first green jacket, averaging at $7,446 per shot.

Runner-up Will Zalatoris earned $4,452 with each swing that he made on his impressive first appearance at The Masters, while the 2015 Masters champion Jordan Spieth earned $2,374 with each shot that he played.

RELATED: HOW MUCH THEY ALL WON AT THE MASTERS

Matsuyama began the final round of The Masters with a four-shot lead and he remained in front throughout the day despite making bogeys at the 15th, 16th and 18th holes.

Xander Schauffele birdied four consecutive holes on the back nine to cut Matsuyama's lead to two strokes, but the American found the water on the par-3 16th hole and essentially handed the tournament on a plate to the eventual champion.

Zalatoris played superbly throughout the week and exceeded everyone's expectations, finishing second and just one stroke behind Matsuyama on 9-under-par.

The total prize money at last year's Masters tournament was also $11.5 million, but Dustin Johnson earned $7,724 with each swing that he made as he completed four rounds in 268 strokes, compared to Matsuyama's 278 strokes.

Johnson won his second major championship at The Masters in November, finishing five shots ahead of Cameron Smith and Sungjae Im. The World No.1 shot a winning score of 20-under-par which became the record low score in the tournament's history.

According to further research conducted by William Hill, Rory McIlroy has earned the most money per shot on the PGA Tour of any player. The Northern Irishman has competed in 182 official events and is estimated to have made $1,920 per swing.