The Masters: Jon Rahm just made a SKIPPING HOLE-IN-ONE across the pond at 16!

Rahm made a hole-in-one at the 4th on Monday, and then produced this piece of magic on Tuesday... 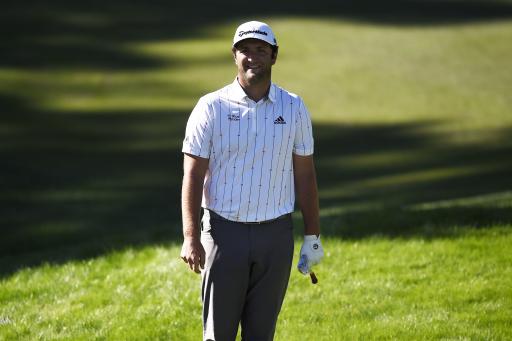 Jon Rahm celebrated his 26th birthday in style today as he skipped his ball across the pond and into the cup for a hole-in-one at Augusta National's famous par-3 16th hole.

The incredible shot, which you can watch below, marks Rahm's second hole-in-one in the space of 24 hours following his ace at the par-3 4th during his Monday practice round at Augusta.

From pond to pin! Rahm skips to a hole-in-one on No. 16 at #themasters

Rahm, who tees it up alongside Bryson DeChambeau and Louis Oosthuizen for the opening two rounds, is considered by many as the best player without a major to his name despite only being 26 years old.

The World No.2 has posted four top-10 finishes in 16 major appearances so far in his career, but his past form at Augusta National reads particularly well with a tie for 27th in 2017 followed by a solo fourth in 2018 and a tie for ninth last year.

His scoring average by par at Augusta National is impressive to say the least, ranking first in both par-4 scoring (4.03) and par-5 scoring (4.40). His par-3 scoring has been the only let down so far, ranking 62nd in that statistic (3.17), but an ace at the 4th earlier today proves Rahm has already got his eye in with the irons.

Rahm will this week bid to become the fourth Spaniard to win The Masters, following in the footsteps of Seve Ballesteros and Jose Maria Olazabal, who both won it twice, and Sergio Garcia who won his maiden major in 2017.

While many big-name players arrive in Georgia in great form this week, few are in better shape than Rahm, who has five top-10 finishes in his last nine starts on Tour, including two victories.