The Masters: Bryson DeChambeau is already sending bombs around Augusta!

Check out the clubs DeChambeau had into some of the greens during his Sunday practice round at Augusta National... 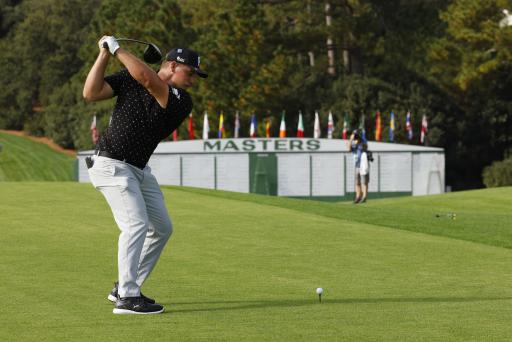 Bryson DeChambeau is already doing what he said he was going to do, and that is to take it to Augusta National at this week's Masters Tournament.

According to former Masters champion Sandy Lyle who played a practice round with DeChambeau on Sunday, the reigning US Open champion is sending bombs for fun on the hallowed Georgia turf.

I think that's all that needs to be said! ⁦@TheMasters⁩ pic.twitter.com/dKykEVuCTL

@brysondechambeau LIVE on the range testing a 48 inch driver.

They’ve got a bag full of @cobragolf heads and they’re trying to figure it out right now.

Lyle, who won the 1988 Masters, claimed there were 10 holes that stood out in terms of the clubs DeChambeau was using into the greens on his approach shots.

At the par-4 1st hole, measuring 445 yards, the PGA Tour's biggest hitter had a flick with a sand wedge into the green - something that will no doubt fright Sir Nick Faldo, who today revealed he would run around Augusta "naked" should DeChambeau find the green with his tee shot on this hole.

Then at the scoreable par-5 2nd, measuring 575 yards, DeChambeau sent his tee shot around the corner and down the hill leaving himself a full 8-iron into the green.

RELATED: 10 BIGGEST HITTERS LINING UP AT THE MASTERS

As per Sandy Lyle, this is the approach shots hit by his practice round partner at Augusta National GC yesterday. Seven being his longest iron. A ridiculous 9-i on 11th. That’s @b_dechambeau of course. Time to turn over in your grave Mr Jones. pic.twitter.com/Y4OBbIi13G

Holes 4 to 7 clearly did not excite Lyle a great deal as he had nothing to report on those four holes, however, DeChambeau was back hitting bombs at the par-5 8th, measuring 570 yards, when left with a 7-iron into the green.

Augusta National has typically always bit hard around the turn at par-4 holes 9, 10 and 11, but Lyle admits DeChambeau made light work of them with a sand wedge into 9, pitching wedge into 10 and a 9-iron into the 11th - regularly ranked as the hardest hole at Augusta National at 505 yards.

Lyle then claimed DeChambeau was left with a sand wedge into the par-4 17th, measuring 440 yards.

In total, from Lyle's report at least, DeChambeau was left with five wedges on his approach shots into the greens, and five clubs that were no more than a 7-iron.

While distance will be key to master Augusta this week, especially with the expected wet conditions making the course play soft and long, there will be a premium on getting the ball close to the pin with those scoring clubs.

DeChambeau ranks first in Driving Distance on the PGA Tour this season, but he does rank 164th when it comes to proximity to the pin.

His putting has certainly improved dramatically of late, which should give him every chance of a first Masters title and back-to-back majors, but the iron and wedge play will need to be on point if he is to see out the job.

What is certain is that DeChambeau has arrived at Augusta with a plan, and that is to crush it off the tee.

Previous
Paige Spiranac: "Brooks playing with something to prove is a dangerous Brooks!"
Next
FootJoy celebrate continued success with launch of limited edition Pro|SL Gold