"He likes to prove people wrong and prove himself wrong" - Rory McIlroy weighs in on seeing Tiger Woods play a practice round at Augusta ahead of a potential Masters return. 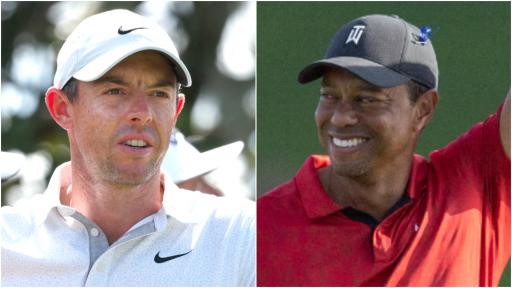 Rory McIlroy believes it would be "phenomenal" if Tiger Woods does the unthinkable and returns to competitive golf at The Masters next week.

McIlroy, who was speaking ahead of the Texas Open where he is a warm pre-tournament favourite, gave his thoughts about Woods to the media after seeing he had played 18 holes at Augusta National just seven days before The Masters.

Woods, who walked Augusta and played 18 holes alongside his son Charlie Woods on Tuesday afternoon, has now headed back home to Florida to consider whether or not to compete in The Masters.

McIlroy, along with many others on the PGA Tour and around the world, are hoping that to be in the case, incredibly just over 13 months since Woods sustained serious leg injuries in a horrifying car crash in Los Angeles.

"For golf and The Masters Tournament and for everyone, to have Tiger there [at Augusta National] would be phenomenal," said McIlroy.

"It just adds to the event, anything Tiger Woods does in the game of golf is heightened whenever he's there so it would be awesome for him to be there.

"He was there yesterday obviously and he's trying to see what he can do, so obviously no one knows but him if he can make it round, and think if he believes he can compete."

McIlroy added: "I've said this so many times, basically March of 2017 and fast forward two years and he wins The Masters, and where he was with his body, and what he had to do to get back to being somewhat healthy. It's not even being somewhat healthy, it's what he has to do before and after the round to get himself ready to play golf.

"It's the sheer will and perserverance and it's incredible.

"If he comes back from this again... he likes to prove people wrong and prove himself wrong I think.

McIlroy is competing in this week's Valero Texas Open on the PGA Tour for the first time in nine years.

The four-time major champion will then go in search of completing the career grand slam with victory at The Masters.

"I wanted my last competitive start before Augusta to be a stroke play event instead of match play," said McIlroy, who did not compete in last week's WGC Match Play.

"It's two completely different mindsets, so that was part of the reason, too.

"I was at Augusta the last couple of days and I just went there on my own. I didn't go with any members, I didn't stay on property. I just wanted to come and see the golf course."

He added: "I'm way more comfortable with my game, I'm happy with where everything is. Everything seems like it's a lot more settled."

Will Tiger Woods play in The Masters? Will Rory McIlroy win The Masters and complete the career Grand Slam? Share your thoughts and comments over on the GolfMagic social media channels now.