High trajectory irons due for May arrival 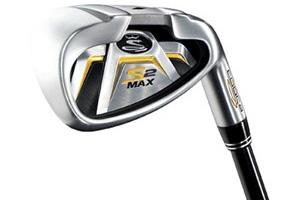 Cobra Golf has announced it has placed a recommended price tag of £449 on the graphite-shafted version of its latest Cobra S2 Max irons (£379 for steel shafts).  The Cobra S2 Max Iron-Hybrid set, which comprises 4/H, 5/H and 6/H hybrids and 7-SW irons fitted with Aldila DVS high launch graphite shafts will cost £589 .

Both sets are designed, says Cobra, for mid to high handicappers looking for maximum forgiveness and high launch, with the S2 Max Iron-Hybrid set featuring Baffler-style clubs for players who prefer hitting hybrids rather than long irons.

In January Golfmagic revealed that the Cobra S2 Max irons were being introduced as game improvement clubs to improve forgiveness, accuracy and distance.

After trying prototypes we also discovered that the clubs deliver the high trajectory that many club golfers crave, thanks to the shifting of the centre of gravity low and to the back of the club. A wide sole also helps the strike from the turf.

It was inevitable with its long history of producing Baffler clubs that Cobra Golf - recently bought by the Puma shoe and clothing group - would produce a combination set of irons and hybrids for golfers who prefer the forgiveness of iron-woods to long irons.

The marriage of the two in one set certainly looks to be one made in heaven!

“The set comes pre-customised with hybrids and irons," says Tom Preece, head of Copbra research and development, "so players don't have to choose which irons need to be replaced by hybrids. In addition, the hybrids were designed utilising the technology of our Baffler hybrid, and provide the superior forgiveness, accuracy and versatility that mid- to high-handicap golfers demand.”