Oosthuizen and Davies make it a double 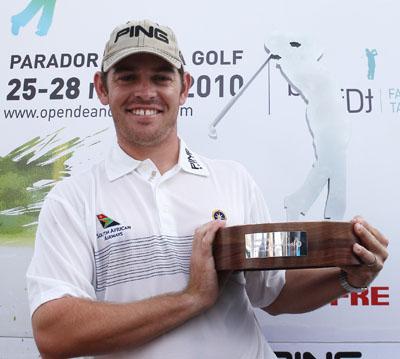 Golfers using Ping equipment are dominating the European Tour and following the success of Welsh rookie Rhys Davies claiming the Hassan II Trophy in Morocco last week, the man he beat - Luis Oosthuizen from South Africa - stepped up to land his first Tour title and claim a spot in next week's US Masters.

With his win at the Open Andalucia de Golf, the man from Johannesburg, moved inside the top 50 in the world rankings to earned his second invite to Augusta.

Four times a runner-up on the European Tour, Oosthuizen battled nerves coming down the stretch but prevailed to win by three at the event hosted by fellow Ping pro Miguel Angel Jimenez. His final round 67 on the Parador de Malaga Golf course lifted him to 17-under-par for the week.

"I was quite nervous down the stretch and very nervous on the 18th tee,” said Oosthuizen, who switched from the Ping i15 to the Ping Rapture V2 driver before the tournament in search of added confidence off the tee.  "I just decided to hit it as hard as I could."

In Dar-Es-Salaam, the previous week, Davies, a former British Boys Champion and Walker Cup player from Bridgend, finished the week on 25-under-par. He relied on 13 Ping clubs in his bag, including S57 irons, a i15 3-iron, Rapture V2 driver, Rapture hybrid, Ping Tour-W wedges and a Ping Tess putter.