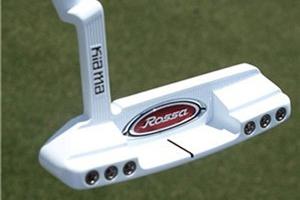 Friday, October 15 is the day TaylorMade has set aside to release the putter so many golfers have been asking for - the white Rossa Daytona Ghost blade used by 2010 Tour winners Peter Hanson and Martin Laird and developed with significant input from the world's most sought-after putting instructor, Dave Stockton.

Tour pros who have also put a prototype similar to the Rossa Daytona Ghost in play include Paula Creamer, who used it to win the U.S. Women's Open, Scott Verplank, Jason Day, Darren Clarke and Sean O'Hair.

The first model in the Ghost Series, the Corza Ghost, has proven an instant success with amateur golfers and Tour pros and in four months has claimed two PGA Tour victories in the hands of Justin Rose and fuelled record-breaking growth for TaylorMade in the putter category.

The Rossa Daytona Ghost features and Anti-skid groove system insert with 14 polymer-filled grooves in the face that hold the ball briefly at impact to promote forwardspin for a smoother roll.

Recommended price of the Rossa Daytona Ghost is £129.