In the Bag: David Horsey

We delve into the bag of the Russian Open champion 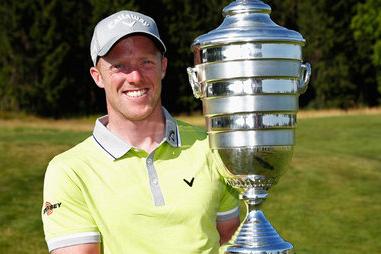 DAVID HORSEY clinched his hat-trick of European Tour titles with playoff victory over Damien McGrane at the Russian Open.

The Callaway staff player, who trusted the X2 Hot driver, X2 Hot Pro fairway and hybrid and SR3 ball, had squandered the lead earlier in the final round but surged back into the mix when chipping in for eagle at the back of 17 before getting up and down from sand at the 18th to force extra time with the Irishman.

Another par four at the first extra hole was enough to give Horsey a third European Tour triumph as McGrane was unable to recover from hitting his second shot into the greenside bunker.

"I knew the chip on 17 had to go in," said the three-time European Tour champion, who previously won the 2010 BMW International Open and 2011 Trophee Hassan II.

"I knew by that point that I was three behind so I needed it to go in. This is a very special win.

“I’m relieved really – that’s the word that sums it up. It was quite similar to my last win, in Morocco, where I made a bit of a mess of a couple of holes on the back nine.

“I didn’t know where I was in the tournament until the 17th. I hit it through the back of the green there and then realised I was three behind and needed to do something drastic quite quickly.

Horsey found 84% of the fairways for the week in Russia and hit 71% of the greens in regulation, as well as ranking fifth in putts per round with an average of 26.8.

In the Bag: David Horsey