In the Bag: Ross Fisher

We delve into the Tshwane Open champion's bag 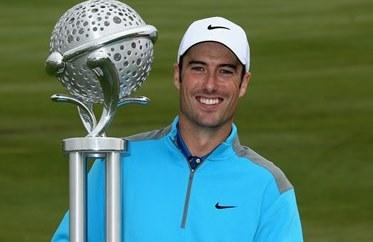 ROSS FISHER captured his fifth European Tour title and first win in more than three and half years with victory at the Tshwane Open in South Africa today.

The 33-year-old Englishman, who last tasted glory at the 2010 Irish Open, carded a solid final-round 70 to finish three shots ahead of Michael Hoey and Danie Van Tonder on 20-under.

Having started the day five shots clear, Hoey reduced the deficit to just one after 11 holes, but then double bogeyed the 12th after finding water with his approach to hand Fisher the initiative.

Fisher then eagled the long par-5 15th for the second time in three days to ease ahead and was afforded the luxury of making bogey at the 18th to seal the win.

"I'm thrilled to get over the line," said the Nike Golf staffer. "It was a testing day with the weather conditions and playing with Mike he put up a great challenge for me.

"I set a target of trying to go out there and shoot in the 60s and almost managed to do it. I had a little mishap on the last but I'm just glad to be standing here talking to you as champion.

"It's been pretty good to me this week (the 15th hole). There have been a couple of eagles, but that was a big putt there.

"I know I was only a couple ahead. To hit a nice shot there and have a good look at three and to see it drop - I think I went four shots clear with only three to play I knew I could coast in.

"There was a little wobble on a few of those holes and I managed to make a couple of good par saves on 16 and 17.

"It would have been nice to shoot 69 but unfortunately I missed one on the last. I'm not going to complain."