Kaymer: What's in my bag 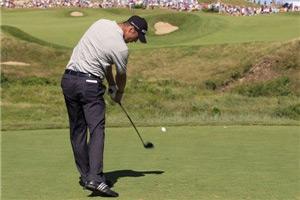 Victory by Martin Kaymer in the US PGA Championship at Whistling Straits was the first in a men's major championship for the TaylorMade R9 SuperTri driver.

The German used a 8.5 degree model with Mitsubishi Fubuki Alpha 70x shaft and also scored a debut triumph in a major for the TaylorMade Penta TP ball. Kaymer's ball carries a distinctive '59' stamp to identify his lowest competitive round.

Though it was a Ping Karsten Anser 2 putter he used to hole some crucial putts in the championship and in his play-off holes with Bubba Watson, the rest of the clubs in Kaymer's bag were all TaylorMade, the brand to which he switched in January 2010. Ping will make him a golf replica of the club.

Said Kaymer: "I was not so calm in the last round to be honest. The last four or five holes I was quite nervous but I played solid golf.  My short game was very good and I knew it was important that I could save pars the last few holes."

"I was never really expecting myself to win; I know that I had a chance but majors are a little bit different to normal golf tournaments."

The first German to win the US PGA and the first Continental European since José Maria Olazábal (1999 Masters) to win a major, Kaymer said: "It was an amazing feeling on 18 in the play-off with two putts to win. That felt pretty cool.

"At first I didn't realise what had just happened. I had just won my first major and I've only been on Tour for four years. I had goosebumps!"

FOOTNOTE: Paula Creamer was the first to use the R9 SuperTri to win a major title, when she claimed the US Women's Open win last month.