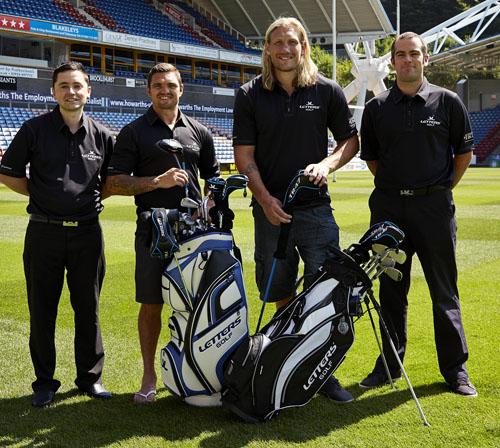 JOHN LETTERS GOLF, which has its technical base in Huddersfield, has taken on two rugby league stars from the Huddersfield Giants team as brand ambassadors.

Captain Danny Brough and current 6ft 6-inch England international Eorl Crabtree already use John Letters equipment by choice and have now been fully kitted out with customised clubs. Both will receive technical and instructional support as the manufacturers aim to confirm how custom fitting can lower a golfer's handicap.

Danny, a 14 handicapper who represents Scotland's rugby league team and Eorl (18) are playing the new TR47 range of clubs and will be finding time to get their handicaps down ahead of the upcoming Rugby League World Cup held in the UK in October and November.

Says Letters' custom-fit technician Kevin Ludkin: "The guys have had a full club fitting session at our Letters academy facility next to the John Smiths Stadium where they play in Huddersfield as well as rounds at Crosland Heath Golf Club.

"This enabled us to view their natural on-course games. Irons, woods, wedges and putters have now been assembled to suit them at our workshop and they've even had their team squad numbers stamped on their wedges.

Are you a rugby league or rugby union follower - or a fan of either? Personally I admire both. Between the World Wars my late father played both codes 'illegally' - as Percy Warters (for Pocklington rugby union) and under the pseudonym of G P Rivers for Hull KR rugby league in the days when to be discovered playing both, even as an amateur, could mean a lifetime ban! Hull KR players all signed a card on his 80th birthday.