Beatriz Recari: 'Women should get same prize money as men' 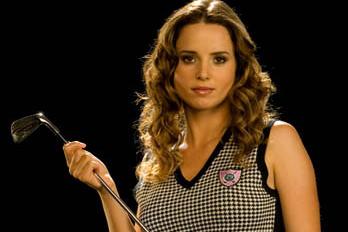 BEATRIZ RECARI wants to see women paid the same as men on their respective tours.

The 26-year-old Spaniard has won on the LPGA Tour, the Ladies European Tour and was a member of the victorious European Solheim Cup team.

But women’s golf is struggling to attract sponsors and it was evident at the last major of the year, the Evian Championship, which had to be reduced to 54 holes due to bad weather and financial constraints.

"The WTA is a good example of where a women's sport has got to the same level as men - they play for the same prize funds - so ideally for us in golf that's a long-term goal, or short-term hopefully," said Recari.

"Every year we're increasing the schedule. Men play 50 weeks and we are competing 32 next year. We still have some to fill in [but] it would be ideal to compete for equal money. [However,] the more attention we bring via the Solheim, the LPGA, the more sponsors, the more viewers we get, [the greater the prospect that] everything can come together.

"Hopefully one day, when I'm still competing, we will be competing the same week as the men for equal money. I admire what the WTA have done and hopefully all our tours can build towards that."

"It's important to raise the awareness of the game. For a long time golf was known for the snob factor: it was expensive; it was for wealthy people. I want people to know it's as expensive as other sports and far more approachable for all people and for anyone than it has ever been,” she added.

"It's a great sport to play: very social; you can compete with anyone. There's no age limit, there's no aggression and you don't get injured as much as other sports. You play for five hours, you can enjoy company and you can play for a long time.

"My dad didn't play that much but I could still go out with my dad and play a decent competitive game. You can't do that in tennis. You're going to smash your dad by the time he's 50 or 60. It [golf] has it all. In the end you compete against yourself which is the best part. You have a lot of mental battles . . . you can't force your opponent to miss. It grabbed me from the start; it had it all. There's so much to this sport, you're always so far from perfection. I want people to discover it and embrace it."

The R&A has been attacked by many for their view that single-sex clubs have a place in the game. They later came out and said they have concerns over club’s men-only policy.

What do you think? Should women get paid the same as men in golf? Tell us on the forum below or tweet us @Golfmagic

Click this link for our 10 of the Best: Ladies Game Improvement Irons 2013.