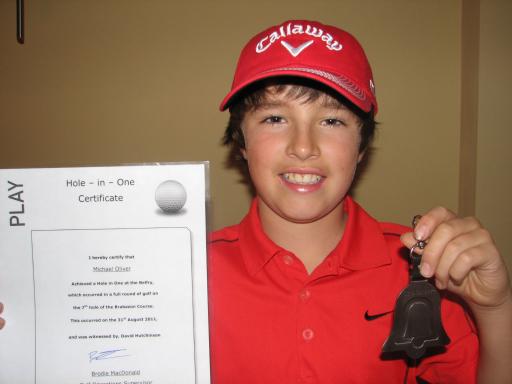 Derbyshire schoolboy Michael Oliver followed in the footsteps of former US Open champion Graeme McDowell by acing the seventh hole at the world-famous Brabazon course.

The 11-year-old, who represents the Derbyshire U12 golf team, fired his text book approach at the 156-yard par-3 across the water and into darkness for the first hole-in-one of his career.

Oliver now joins the likes of 2010 US Open champion McDowell, who achieved the feat at the 2006 British Masters.

“I was so excited about playing The Belfry, but to get a hole-in-one at the seventh was amazing,” said Oliver.

“I now have an engraved Belfry Bell stating my achievement and in big letters it says ACE!”

For more information on the iconic course, visit their website - and don’t forget you can get involved in their “shotgun start” campaign between now and February.

The MOST POPULAR adidas Golf shoes as seen on the PGA Tour!
Nike have the BEST golf caps as worn by stars on the PGA Tour!
Golfmagic
The Belfry
Brabazon
Graeme McDowell
Previous
Hypnotist offers solution to dreaded yips
Next