Calc dresses as Rickie for Halloween 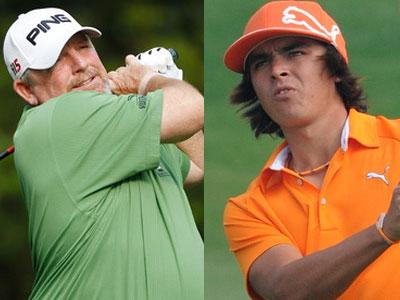 Mark Calcavecchia had an interesting costume for Halloween earlier this week - Rickie Fowler.

Although we don’t have any pictures to laugh at, the thought of a big Nebraskan dressing up as a pencil thin 22-year-old sounds scary enough.

Calcavecchia and his wife, Brenda, came up with the idea when visiting a golf store in Ohio a few months ago. There was a display of Fowler’s Puma-brand gear, and Calc tried on one of the trademark flat-brimmed hats.

“I was a funny, old, fat Rickie Fowler, yeah,” said Calcavecchia, who currently lies one shot off the second-round lead at the Champions Tour's season-ending Charles Schwab Cup Championship - an event he must win in order to overhaul money-list leader Tom Lehman.

“They started laughing at me and told me I ought to be Rickie for Halloween. And of course Brenda went as Natalie Gulbis, so that was pretty funny too.”

So what did Fowler dress up as at the same Florida party?

“No one could really figure it out,” added the 1989 Open champion. “He looked like a white Steve Urkel. I don’t know if he was supposed to be a nerd or what.”