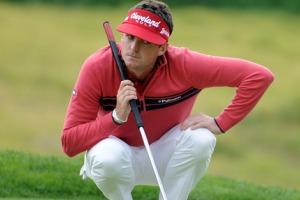 Midway through the opening nine holes at Doral on Sunday, Keegan Bradley appeared to have one hand on the Gene Sarazen Cup.

My digits, however, were hovering over the off button.

While we let Bradley off for his spitting antics last month, which he appears to have stopped, there is one underlying aspect of his game we cannot. Slow play.

The 25-year-old has undeniably become one of America’s best young talents, securing two PGA Tour titles including last year’s US PGA Championship, but here at Golfmagic Towers we’ve found it almost impossible to jump aboard the Bradley bandwagon.

His pre-shot routine is not just slow. It’s glacially slow, as was showcased at the WGC-Cadillac Championship. Compared to the refreshing pace of play from his final-round playing partner Bubba Watson, who just tees it up and rips it, it was little surprise to see the Tour’s biggest hitter struggle to find his rhythm in the early stages of the final round.

Pace of play is arguably the most irritating problem in modern golf, and Bradley is one of the biggest miscreants on a long list of fellow practitioners that includes other bright young sparks Webb Simpson, Jason Day and Kevin Na.

Bradley is so painfully deliberate you pray the American broadcasters will go for their customary ad break or three before he is finally ready to play.

After finding the right-hand trap off the tee on the par-4 sixth, it took Bradley more than 90 seconds to perform his elaborate head-bobbing pigeon dance - or whatever you want to label it - before addressing the ball and then backing off for the umpteenth time.

Still unsettled on the shot in hand, he decided to get a better look from the fairway, presumably just to check the green was still there, and then get back into the sand creating more footprints. Much to his caddie’s delight.

And it doesn’t get much better on the greens. He would make Jim Furyk look like Aaron Baddeley in a putting contest.

In fact, the face he pulls to line up his putts, featuring that bizarre cock-eyed stare towards the hole, is not dissimilar to mine when I’m watching him. It took him close to three minutes to take three putts from inside six feet on the par-5 10th. That’s just ridiculous.

I also felt sorry for Watson on the 72nd hole when he had a chance to tie eventual champion Justin Rose.

Bradley was faffing around on the wrong side of the fairway, en route to posting a back-nine 41 and tie for eighth, trying to play a shot over the top of the grandstands, while his playing partner was waiting to convert his birdie putt from just outside six-feet to force a playoff with the Englishman.

Watson was forced to spend as much time looking at his putt as Bradley does on a regular basis. No wonder he missed it.

What amazes me is that Bradley didn’t appear this slow when he claimed the Wanamaker Trophy last August. Why now?

The 2011 PGA Tour Rookie of the Year appears to be taking every avenue possible to make 18 holes last as long as possible. He’s also infuriating many spectators and playing partners in the process.

I for one just hope two-time major champion and fast-paced player Angel Cabrera gets to play alongside Bradley as this year’s Masters. Perhaps he’ll sort him out. At the 2009 Players Championship, the powerful Argentine informed one journalist: “Gringo, I play with Kevin Na. Painful.”