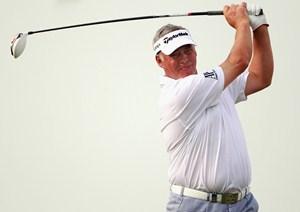 Darren Clarke is back in competitive mode this week after recovering from a hamstring strain that prevented him from playing in the Masters.

The 2011 Open champion has been sidelined for five weeks after picking up the injury while playing tennis with his children but is now ready for action at the Indonesian Masters.

“It has been a frustrating period,” said the 44-year-old Northern Irishman. “I’m not good at sitting and not doing anything. I’ve had intensive treatment on my hamstring and it is fine now.

“I was playing tennis with my kids and I thought I was 24 and not 44! Unfortunately I had to pull out from Augusta and Korea last week.

“I couldn’t do anything. I could hardly walk, hit golf balls or putt. I had to sit at home and watch the Masters. I only watched the last round on television because if I watched every day, then I would have been frustrated.”

The Indonesian Masters has only been staged twice and both times the trophy has been held aloft by Lee Westwood. Although the Englishman hasn’t opted for the three-timer this week, he has at least given his good friend Clarke some advice about Royale Jarkarta.

“I haven’t played here before but Lee has told me bits and pieces about the golf course," added Clarke.

“The greens and fairways are sensational here. It is set up tough but fair as well. It will be a good, fair and stern test.”

Other star-studded players in the field include Open champion Ernie Els, Thongchai Jaidee and Bernd Wiesberger.

When?
Thursday May 2 to Sunday May 5

Did you know?
No Indonesian has won an international tournament at home since Kasiyadi won the Indonesia Open in 1989.

Betting
Ernie Els heads the betting at 8/1 and is the clear pick in what looks like a particular weak field. Visit 888sport.com for more odds.