Dubuisson can be World No.1, according to former star 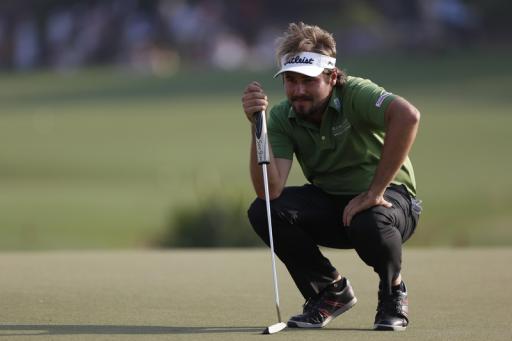 FRENCHMAN Victor Dubuisson has the game to win majors and become World No.1, according to former Ryder Cup player and compatriot Thomas Levet.

The 23-year-old showed he is a potential superstar last week when he went all the way to the final at the WGC-Accenture Matchplay final, eventually losing to Jason Day on the 23rd hole.

He has become a YouTube favourite after he played two of the greatest up-and-downs the game has ever seen and he did so with an ice-cool exterior he has become synonymous with.

"Victor lost in the final, but the first thing he said after was that it was a step forward for him," his friend Levet said.

"His goal isn't to win that event and he wants to win bigger things. He is a very ambitious guy. He is aiming really high.

"Victor's determination is second to none. He's very dedicated to the game and he wants to become the best player in the world," said the 45-year-old Levet who is part of the same management stable as Dubuisson.

"He is giving it everything he has and it's nice to see. He wants to reach the top. He dreams big and he's not afraid to say it."

"The good thing about Victor for me is there's still a lot of room for improvement," added Levet, who has six European Tour title to his name, the record for a Frenchman.

"Imagine what he will be like in a few years time? He will be France's best-ever player by far. He has all the weapons to achieve that. He can go a long way if he stays injury free.

"You always need a bit of luck to achieve in golf, to win majors for example, but with a bit of luck on his side he can do very big things."

Dubuisson does things his own way. He doesn’t practice as much as his fellow competitors and prefers his own company.

“I've known him for maybe eight or 10 years now," said Levet. "We have the same manager and he's a good friend on the tour.

"He's a shy guy, he's not outspoken, but no, he's not a loner. It's just that he gives everything to his golf," Levet added.

"Victor likes to mix with the French guys, go out to dinner with us. But he does have a different diet to the rest of us. He doesn't eat a lot.

"He does his own stuff sometimes and just goes with the feeling he has at the time. Yes, he's a very different type of guy but, hey, maybe that's why he's so successful."

If you’re going to be compared to a golfer, Tiger Woods isn’t a bad pick and Levet sees the World No.1's attributes in the 23-year-old.

"Funnily enough Victor needs to improve his chipping and he could also hit the ball a lot higher," said the French veteran.

"His distance control and short irons aren't as good as some other players and his left to right fade is not his favourite shot, but he reminds me a lot of Tiger.

"Tiger doesn't practice a lot on the range. When he gets to a tournament, he is always ready and Victor is the same.

"Victor gave an incredible performance last week, but the way he's been playing the last couple of years I always thought he could do very big things in 2014."