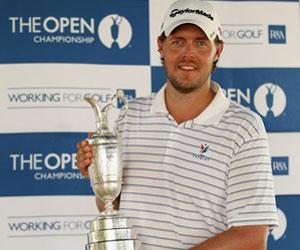 Remember that giant 6’5 South African who rose to prominence a decade ago, sporting those sort of chunky forearms Popeye put down to spinach?

While his career hasn’t been quite so plain-sailing of late, capsizing to a current World No.719, Martin Maritz has revealed a burning desire to get his game back on board in 2012.

Once hailed as his nation’s biggest rising star when turning pro in 2000, Maritz proved exactly why two years later when smashing the ZAR1million barrier on the Sunshine Tour, highlighted by a runner-up finish behind Justin Rose at the Dunhill Championship.

He would then maintain his solid form through to 2004 with two top-fives at the Scottish and Wales Open en route to finishing a career-high 52nd on the Order of Merit.

But things steadily took a turn for the worse in 2006 when the big hitter from Pretoria lost his card after finishing 26th on the Challenge Tour Order of Merit and quickly lost enthusiasm for the sport.

The glory days may have been sapped from his career, yet in an exclusive interview with Golfmagic, Maritz admits how qualifying for last year’s Open and watching his countrymen lift trophies for fun has revitalized his passion for the game.

The 33-year-old, who now resides in Oklahoma, also confirmed how he’s now found a new life for himself as a professional, playing on several different tours, as well as giving back to his fans by organising off-course safaris and a new online golf academy and pro-shop.

Here’s what the TaylorMade staffer had to say...

Martin, could we start by finding out how you got into the sport?

I first picked up a golf club at the age of seven after both my parents encouraged me to take up the game. For the first couple of years the drill was the same; caddy the front nine for my dad at Pretoria Country Club and chip and putt around the putting green while he completed the back nine.

I had excelled at rugby and tennis as a youngster but became too tall for a fly-half at rugby union when I reached six feet. But it didn’t take long for me to get hooked on golf and my mum to drop me off at the course almost everyday after school.

With all this practice I reached a scratch handicap at the age of 13 and ended up representing South Africa at both junior and amateur level, competing at the Junior World Cup in Japan and the Africa Zone Six Championship in Malawi.

I owe a lot of my early success to my parents and also to the South African Junior Golf Foundation who run a great junior programme. It is one of my goals for the upcoming year to have my own junior tournament up and running as a way of saying thanks.

You’ve had some great moments since you turned pro, including qualifying for the Open last year, but what would you say has been the highlight of your career-to-date?

Last year’s Open was definitely the highlight of my career so far. It was such an amazing week, one I hope to experience again many times. It really did restore my belief in the game and that I could once again play at the top level.

The one thing I will never forget was the roar heard from the crowd when Tom Watson slammed home his hole-in-one. It was so loud and must have gone on for three minutes. It gave me goose bumps!

I unfortunately missed the halfway by three shots, finishing on 7-over with rounds of 73 and 74 but nevertheless it was an incredible week for me.

You play on many different tours throughout your career. Which one do you enjoy the most?

I have been very lucky to have played golf for a living. It has afforded me the opportunity to travel to 42 countries thus far and some of my favourite places include Dubai, Sweden, Thailand, Hong Kong and too many others to mention. I really enjoyed my time on the European Tour as well as Asian Tours.

Interview continues. Click here to see what's next for Maritz...