Rock: Ryder Cup not on my mind 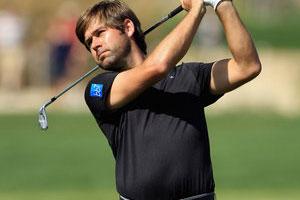 Robert Rock has vowed to keep his feet on the ground after his £290,000 Abu Dhabi Golf Championship victory and not think about the possibility of selection in a Ryder Cup year.

Speaking to his regional newspaper, the Lichfield Mercury, after beating Tiger Woods and Rory McIlroy to propel the English journeyman into the world spotlight this week, he said: “The Ryder Cup has always been something that’s been a little out of my reach, so we will see.

“I will just try to play good golf for the rest of the year and get my schedule right now things are changing so much. The Ryder Cup is such a big deal and I think it can get in the way of playing your own game.

“You start to think more about earning Ryder Cup points than on your game.”

With both his Tour wins coming in the last 12 months after a decade of toil, he feels there is more to come.

“You make a big deal of trying to win one tournament because that’s what you start every week aiming to do and it’s hard. When you win one, you hear people say ‘make sure you win again’.

“I used to think I would be happy with just one win but after I won last year you want to win again to show you can duplicate that form. I’m lucky I’ve managed to win one where there’s been a better quality of field.”

So what’s the key to this sudden success?

“My putting has got better and that is probably the most important improvement. You can’t win tournaments without putting well. You have to know what your weaknesses are – you can’t say things are okay if they are not.

“You have to compare yourself with what other people are doing and get every part of your game the best it can be. Finding the answers to a problem is harder than identifying it, though. Solutions are complicated – if it was easy, everybody would get better.”

Callaway staffer Rock, who lives near Rugeley in Staffordshire, is a former trainee PGA club professional who qualified at the PGA Academy at The Belfry and has suddenly jumped into Ryder Cup contention in tenth position.  But he insist he’s not letting his thoughts wander too far ahead to Illinois next September.

“I think I will try to carry on as normal and treat it as a surprise if I get in.”