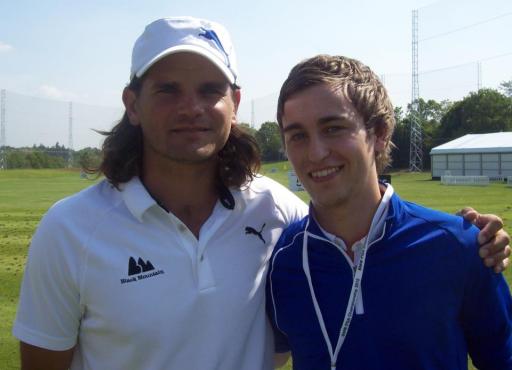 Beyond those Roger Federer looks and the Clairmont Military Cap is a Swede determined to rally in 2012.

But with only one victory on the Asian Tour in 2009 since, the Cobra Puma Golf staffer admits he’s been struggling to regain the form that once rocketed him into the World’s Top 50.

While things have since quietened down for the current World No.159, who narrowly missed the cut on 3-over at the BMW PGA Championship last week, it’s evident Edfors is more determined than ever to rekindle his game heading into a lucrative few months on the circuit.

You’re most remembered for winning three times in the space of five months on The European Tour in 2006. Could you relive your memories of that incredible season?

It really was a great year. After I won the Challenge Tour in 2003 I thought I was ready to contend on The European Tour but I struggled for a bit. When I won my first event at the TCL Classic in 2006, it really took the pressure off knowing my Tour card was safe. It opened up doors.

Two months later, I then won the British Masters at The Belfry before going on to shoot a final-round 63 at the Scottish Open, which I would say was the most emotional victory of the three.

I had my family there, the weather was perfect all week and Loch Lomond is just a beautiful setting. It also got me into the World Top 50 and into the majors.

After your victory at The Belfry, you said: “I was smiling so much, it felt like I was going to swallow my head.” Could you elaborate, please?

[Laughs] It was perhaps a bit over the top but I had just beaten a great field on a very historic golf course. It was my second victory in two months and I was very happy.

Why do you think you played so well that season?

I had some very good putting weeks and that always helps! Obviously, you can’t just win a tournament by putting well as you need to have the whole game in tune as well, but the stroke was really working nicely. If I can relive that sort of putting form, I can certainly win again, that’s for sure.

You’ve been with Puma ever since breaking through on The European Tour in 2006. Could you tell us what you love most about the brand?

It really is a fun brand to be apart of. Puma Golf has many different styles and I believe the brand stands out from the crowd. I have always been interested in fashion and Puma certainly fulfils my expectations.

Puma was a big brand when I was growing up as a kid and then they kind of disappeared for a bit. But then there was a little revolution and now they seem to be picking up the transfers, obviously with the likes of Rickie Fowler and Ian Poulter.

Talking of Rickie, he obviously loves to wear certain colours for each day, including his final-day orange. Do you follow a particular trend or do you just pick up whatever is in the cupboard?

No, I don’t have a set colour for each day. I just like wearing lots of different outfits and trying out the different styles Puma has to offer. Obviously Rickie has his orange outfit to represent Oklahoma State but that is not something I would ever wear!

Interview continues Click here to hear about Edfors' goals for the season and the Swede answers some quick-fire questions.