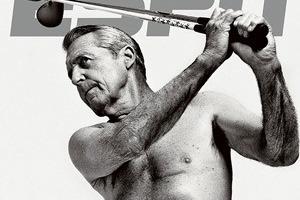 At 77 years young, the South African golfing legend with nine major titles to his name, has appeared in all his glory for ESPN Magazine's Body Issue - where athletes pose naked for the magazine.

Ladies European Tour professional Carly Booth also got her kit off for the magazine.

Player, pictured left, tweeted: 'After a lifetime dedicated to health and fitness I'm chuffed to be in ESPN magazine's Body Issue to hopefully inspire others to workout and live well.'

Player now becomes the oldest athlete to appear in the special issue.

When Golfmagic caught up with The Black Knight at Golf Live last season, he explained to us how he does 1,000 sit-ups per day!