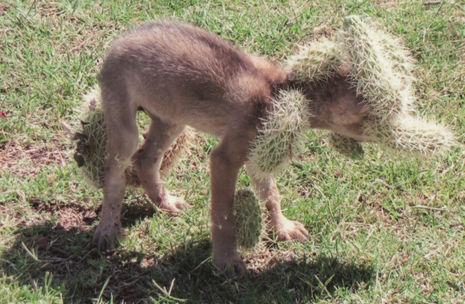 GOLF course workers in Sun City, Arizona saved a coyote pup from a painful death after it was spotted at the Pebblebrook Golf Course, covered in cactus spines.

A walker spotted the pup in distress and a bystander alerted the fire department. Meanwhile the coyote pup's mother stood close by her pup, unable to help.

Two golf course workers arrived on the scene wearing heavy-duty gloves and carrying pliers. They managed to get hold of the pup and remove the cactus spines. A police officer stood by to keep an eye on the pup's mother to ensure the golf course workers were safe as they went about the delicate task of removing the spines from the troubled pup.

During the 15-minute operation, seven large cactus chollas and over 20 spines were removed from the pup. Although it had spines in its nose and mouth, luckily none penetrated its eyes.

Once loose, the pup ran over to its mother. "I could not stand by and do nothing and let it die in misery." said Shawn Bordine, one of the men who helped remove the cactus spines from the pup.

See below for more photos.

Tell us on the forum if you have encountered wild animals on the golf course or even if you've rescued one...