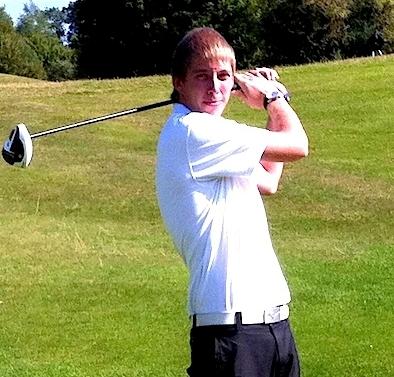 There’s no greater feeling for a golfer than seeing your ball slam against the flagstick and disappear for a hole-in-one.

I suppose the only downside is that you’re required to work overtime in the office a week later as you recoup the funds spent on drinks for your playing partners and those that hear about it in the 19th.

But if you thought slam dunking it on a par-3 was impressive enough, it’s nothing compared to the feat of Wycombe Heights ace Mike Bristow.

The university student, working as a retail assistant at the public pay-and-play facility in the Chiltern Hills, pulled out his new driver for the first ever time to record a stunning hole-in-one on the downhill 379-yard par-4 4th.

“I can’t believe I’ve bagged a ace of almost 400 yards,” said Bristow, midway through a sports management and golf studies degree course at the University of Buckingham.

“I felt there was always a chance of making the green as the hole was playing down wind, even though I usually find the bunker just short of it.

“I hit a high draw but didn’t see the ball go in the hole. I thought my colleague Richard Perkin, the club’s PGA Teaching Professional who was with a group nearby, was messing around and had thrown the ball somewhere.”

It’s believed Bristow is the first player to score a one on the 4th hole in the club’s history.

Just for the record, Bret Melson is the leader in the clubhouse for the longest hole-in-one in history after acing the 448-yard par-4 18th at Ko’olau Golf Club in Hawaii in 2007.

But Bristow has the beating of the professionals. Andrew Magee is the only player in PGA Tour history to hit a hole-in-one on a par-4 - although he was given a helping hand along the way.

Magee drove the ball onto the green at the 332-yard 17th at the 2001 Phoenix Open while the group ahead were still on the green. His ball ricochetted off Tom Byrum's putter into the bottom of the cup.

So the challenge has been laid down to golfers across the country – is there anyone out there who can match a par-4 hole-in-one or even claim a longer ace than 379 yards?

On that note, I’m off to the gym to flex the guns before watching a bit of Happy Gilmore for some inspiration.

PGA Tour
Kevin Na misses chance of 59, but still leads Sony Open after Round One
Golf news
WATCH: Ball embeds into side of the cup, but is it a hole-in-one?
PGA Tour
Will Zalatoris recreates childhood memory with AMAZING HOLE-IN-ONE!
Golf news
WATCH: Is ANYONE cooler than Fred Couples on the driving range?
DP World Tour
OUTRAGE! DP World Tour pro makes stunning hole-in-one but DOESN'T win a Jaguar