Is Jack the next Lee Westwood? 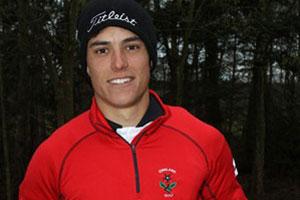 I was privileged in January 1994 to personally wish a young, shy Lee Westwood good fortune as he embarked on a new career as a rookie professional, having won the British Youths Championships as a 20-year-old.

He went on to make cuts in his first 12 events, collected prize money in 22 of his 27 starts that season and was heralded a future superstar.

Fast forward 18 years and I suggest you remember the name Jack Hiluta.

It won’t mean much unless you follow the amateur scene but this 22-year-old from Chelmsford, Essex has the hallmarks of exceptional talent, an old head on young shoulders and a certain charisma that even Westwood would envy.

He has come up through the ranks of junior, US collegiate and elite amateur international and this week in Seville rubs his broad shoulders with the cream of the European Tour at the Real Seguros Spanish Open.

He earned his exclusive ticket to compete alongside some of his heroes, causing an upset in Mallorca last month by claiming the Spanish Amateur title with a 4&2 defeat of World No.25 amateur Marcel Schneider.

We met at Woodhall Spa as Hiluta and the England golf squad of elite players recieved their complimentary PowaKaddy Sport trolleys and met to fine tune their games ahead of the spring and summer series of amateur majors, the home international series, and several events that combine to create both world and British amateur rankings.

“It has always been my ultimate aim to be a pro golfer,” Hiluta told me. “I would love to be on the European Tour, the PGA Tour, and play in majors.

“It’s my dream and knowing how to get there is going to be the tough part but I’m looking forward to at least testing myself against the pros. It’s going to be a good experience.”

He has been promised practice rounds with Richard McEvoy and Irishman Gareth Maybin, a former fellow student at South Alabama University in Tennessee where Jack played his collegiate golf and gained a science bachelor degree.

Hiluta, who represented GB&I in the Ryder Cup-style Michael Bonallack Trophy at Monte Rei in Portugal before flying out to Spain, faces a season of demanding amateur events with the 2013 Walker Cup in the US his goal.

“It’s something I’d love to play in. It’s the sort of life experience I want and it can open so many doors for you,” observed Hiluta, a former captain of England Boys, where he often came up again an emerging Rory McIlroy.

“It gets a lot of exposure and invitations and I’ll only be 24 then so I’m not in a rush. I want to be sure that when I turn pro I’m ready to turn pro and can compete. That’s what it’s all about.”

I asked if it had surprised him that Rory had rocketed to fame so quickly.

“No, not really. I spent a bit of time with Rory when he was younger and it’s good to measure yourself against someone like that. He was always fantastic but had an aura about him. You just knew he was going to be that good.

“He had the ability to surpass the expectations of what some people thought he could do. And it has encouraged me because I know personally someone who has done it.

“It keeps your confidence up having that feeling you can go out there and compete with them; it’s a good thing to remember.”

And mark my words, golf will remember Jack Hiluta.