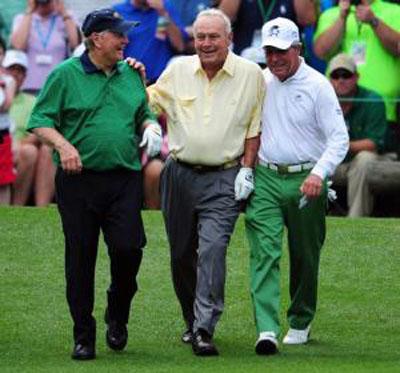 Originally known as The Big Three whom between them have won 13 Green Jackets, they toured the world playing exhibition matches in the 1960s for television and inspired a generation to take up the game.

Serving as an honorary starter officially began in 1963 with Jock Hutchison (1963-1973) and Fred McLeod (1963-1976) performing the duties and evolved into one of the most famous traditions.

I was privilged to witness first hand legends Gene Sarazen, Byron Nelson and Sam Snead tee-off on April 9, 1998, the year Mark O'Meara won and have retained the start sheet for that day.

I recall Sarazen's tee shot, the previous year land next to me under the tree to the right of the first fairway and prepared to hold the crowd back to see him play his approach.

Sadly he declined and instead sat in his buggy while his caddie retrieved it - a Titleist with an Augusta logo. I wish I had asked if I could keep it.

On Tuesday evening prior to the Champions Dinner, The Big Three took a walk up the 18th fairway and reminisced about their Masters experiences.

Said Nicklaus: “I always enjoy getting together with Arnold and Gary, especially at a place that means so much to all of us. They are two of my closest friends in golf. We’ll have a good time, share some laughs and a few needles.

“But rest assured there will be some competitive juices flowing as well when we tee it up. If there wasn’t, something would be wrong with us.”

Among his many remarkable records is his tie for most runner-up finishes (four) and his record as oldest champion (46 years, 2 months, 23 days) with his win in 1986.

I've got two 1997 Masters Players Guide souvenirs to give away!

To win one of these glossy books with with all the stats ahead of Tiger Woods' record 18-under par victory, tell us which golf legend you would have most liked to meet and what question you would have asked.