Matthew is Queen of Killeen at Irish Open 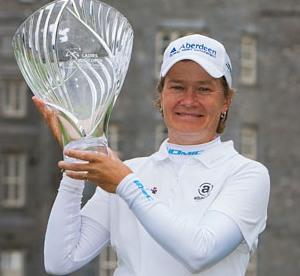 Matthew - one of the stars of the winning European Solheim Cup team at the County Meath venue last season - carded a consecutive round of 71 to seal her fifth Ladies European Tour title on 7-under.

The 42-year-old from Edinburgh faced a back-nine tussle with her Solheim Cup team-mate and 2011 Irish Open champion Pettersen but edged clear with birdies at 15 and 17, enabling her the luxury of being able to bogey the 18th.

“I am absolutely delighted to win - I think it was always going to be difficult coming back here with so many good memories being here,” said Matthew, speaking of Europe’s 15-13 victory over the United States at Killeen Castle last September where she recorded two wins and two halves.

“It could have worked either way but maybe I was a little bit inspired by some of my play from last year in The Solheim Cup.”

Pettersen, playing in the group ahead of Matthew, made an eight-foot birdie putt on the par-three 16th to stay level with Matthew but crucially dropped a shot on 17 after failing to get up and down from the greenside bunker.

Matthew then capitalised when rolling home a five-foot birdie putt at the short par-4 17th to move two clear up the last. Pettersen missed her downhill birdie putt on 18 and although Matthew dropped a shot, finding the bunker right, two putts were enough to seal the win and the €52,500 first prize.

“It’s always difficult going out in the lead,” added the Scot. “I was just kind of trotting along there at 7-under and saw Suzann making some birdies. I think she thought she was in The Solheim Cup again.

“I made a good birdie on 15 and then the one on 17 just gave a little bit of a cushion coming up the last, which was nice. I knew I had a two-shot lead and I had seen what Suzann had done on 17 and 18 so I knew she was two behind and I reckoned I could make five from there.”

England’s Laura Davies carded a joint-best-of-the-day 68 to finish in third, while Carly Booth, who spoke exclusively to Golfmagic recently, finished in a tie for seventh having found herself just a shot behind Matthew heading into the final round. Booth, however, moves back to the top of the 2012 LET money list.