Paralympic legend to tee up at DBO 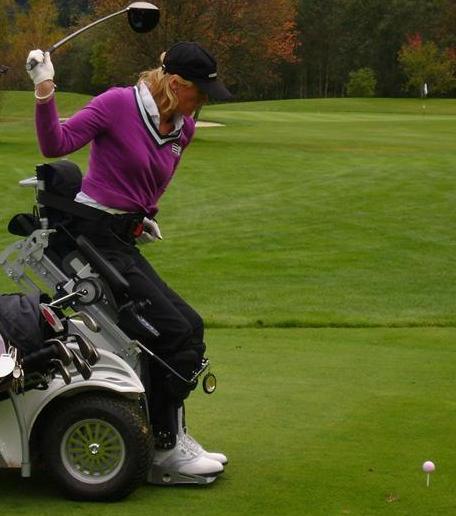 Paralympic gold medallist Monique Kalkman has confirmed her participation in the yourgolftravel.com Disabled British Open from August 24 to 26.

The 47-year-old, who has won Paralympic gold in wheelchair table tennis and tennis, has set her sights on golf, which she started playing in 2009 after being struck by cervical dystonia – a chronic neck problem.

Kalkman was diagnosed with cancer at 14, resulting in the tennis starlet being paralysed from the waist down but it didn’t stop her from fulfilling her dream of becoming a world-class athlete.

“I chose to talke up golf ahead of other sports because it has so many interesting sides,” said Kalkman, who claimed table tennis gold in 1984 at Stoke Mandeville, before taking singles and doubles tennis gold at Barcelona in 1992.

Kalkman retired from competitive sport in 1997 but has now developed a passion for golf and her entry into Britain’s foremost disabled golf event is the first step towards achieving her new ambition that will hopefully coincide with the sport’s inclusion in the 2020 Paralympic Games.

“Hopefully golf will be included in the Paralympics and I like to aim high. When I play sport, I’m used to, and love, giving everything and challenging myself,” she added.

“I’m used to setting goals, breaking them down into manageable steps and building towards them.”

With little more than two weeks until the fourth yourgolftravel.com DBO tees off at East Sussex National, Kalkman explained she needed little persuasion to put her name down.

“I chose to play in the DBO because I heard on tour that this is one of the best tournaments around – the UK is the Mecca of golf – and because my family loves the UK.

“And we will combine it with going toLondonfor the Paralympic Games after the tournament.

“I’m going there to receive the Brad Parks Award, an international award in wheelchair tennis for my contribution to the sport over the years both on and off the court.”

DBO’s project manager Lindsey Horton said: “I don’t think it’s going over the top to say that Monique is a living legend in Paralympic terms.

“She is the first, and currently only, two-discipline gold medallist and it would take a brave individual to bet against her achieving a third if she sets her mind to it.

“Naturally we are delighted to be able to welcome such a renowned sportswoman into our fold and we’re sure she’ll revel in the competition and the unique social atmosphere the yourgolftravel.com Disabled British Open creates.”