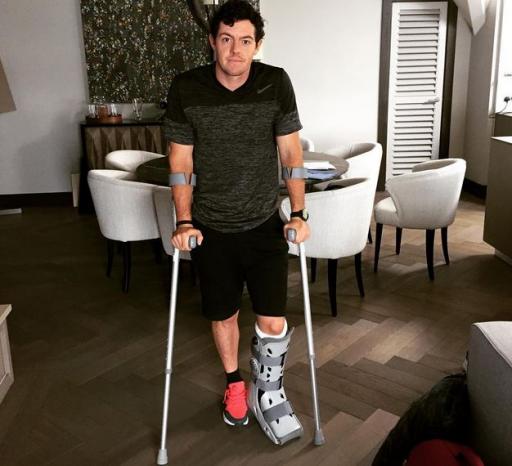 Rory McIlroy will miss the Open Championship at St Andrews after injuring his ankle playing football with friends.

The world number damaged ankle ligaments on Saturday and despite pulling out of this week's Scottish Open he had not ruled out playing at the Home of Golf next week.

But he wrote on Instagram: "I'm taking a long-term view of this injury.

"Although rehab is progressing well, I want to come back to tournament play when I feel 100% healthy and 100% competitive."

On Monday, the defending Open champion posted a picture on Instagram and also tweeted to say he has "total rupture of left ATFL (ankle ligament) and associated joint capsule damage in a soccer kickabout with friends on Saturday."

The 26-year-old holds both the Open and the US PGA title and golf fans were savouring an Old Course clash with American world number two Jordan Spieth, who is the Masters and US Open champion.

McIlroy has endured a mixed season, missing the cut at the Honda Classic, the BMW PGA Championship and the Irish Open, but also winning the World Golf Championships Match Play and the Wells Fargo Championship in May.

Treat yourself to a new golf bag at Christmas with Scottsdale Golf!
The BEST Peter Millar golf apparel gifts for this Christmas!

He finished fourth at the Masters and joint ninth at last month's US Open.

What do you make of McIlroy's injury? Should he have been playing football? Who is favourite for the Open? Share your thoughts in the forum, on Twitter, on Facebook or visit us on YouTube.