Sandy Dawson only the second Aussie in 60 years 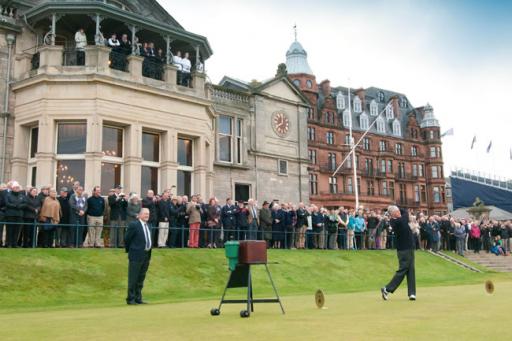 While  most of us were still emerging from our slumbers at 8am this morning, the new captain of the Royal and Ancient Golf Club of St Andrews was performing one of the long-est established ceremonies in golf.

Australian Sandy Dawson - no relation to the current R&A Secretary Peter Dawson - took up his new role in the traditional way by driving a ball down the first fairway to great applause from his fellow members then watching as local caddies joined a race to retrieve it in return for a golf sovereign.

That particular honour fell to Alan Tulleth a 21-year-old from St Andrews  who has been caddieing for three years.

He said: "I was actually videoing the ceremony when I saw the ball coming towards me just short of the burn, so I was able to slide in to get it. It’s a proud moment for the new Captain and for all of the caddies taking part.”

Sandy Dawson is only the second Australian to captain the Club after Viscount Bruce of Melbourne held the position in 1954. He succeeds Frenchman, Pierre Bechmann.

“I had a few warm-ups down on the range with Jim Farmer, The R&A professional, so I was more relaxed than I might have been ,” he said.

“It’s very exciting to be only the second Australian Captain in 60 years. My family are all here watching and I think they are very proud and relieved that I hit the ball down the middle.”

As Captain, Mr Dawson will represent The R&A and support its work in developing golf around the world. He will attend R&A Championships in the professional and amateur games and assume an ambassadorial role for the Club.

The 70-year-old four-handicapper is a former Australian Universities champion and, from 1988 to 1993, was captain of Royal Sydney Golf Club where he has been president since 2010. He's a former managing director of Arnott’s, one of the largest food companies in the Asia Pacific region and lives in Sydney with his wife Jane.

In the past, the club captaincy was bestowed on the winner of the annual Challenge for the Silver Club but by the early 19th Century the captaincy became an elected office.