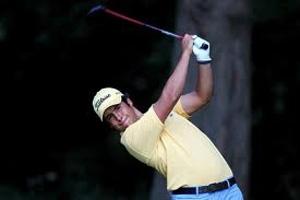 Adrian Otaegui has been backed by European Ryder Cup skipper José María Olazábal after earning his spot as the second youngest member of the 2012 European Tour.

The 19-year-old, just five months older than Junior Ryder Cup partner and good friend Matteo Manassero, earned his place through this month’s Q-School and becomes the youngest Spaniard to earn his card since Seve Ballesteros.

Noted Olazábal: “I know Adrian well and have trained with him on a quite few occasions. He is already a very good golfer, if still young and learning.

“He is strong with his irons and has a fantastic short game. He is a really promising player, but still has to work hard, particularly to hit with more power off the tee, which in the modern game is vital.”

2010 British Boys Champion Otaegui, who is represented by Jamie Cunningham and Professional Sports Group, added: “I am looking forward to playing the European Tour in 2012. I have learnt a lot on the Challenge Tour this year since I turned professional. Tour School was great, but now the hard work begins in a couple of weeks.”

Fluent in Spanish, French and English, Otaegui is originally from the Basque region of Spain but recently moved with his family to France. His father Javier will continue to caddie for the youngster as he begins life on tour, with the South Africa Open likely to be his debut.