One to Watch: Tom Berry 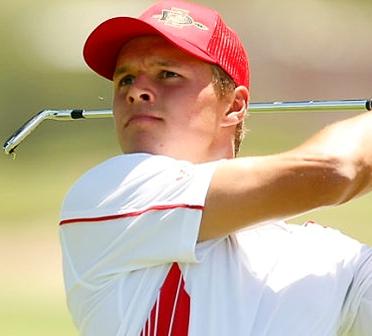 It was July 2002 and the junior coach at Burhill Golf Club came up to me asking for a favour before I set foot on the first tee for a Saturday Stableford.

‘Andy, do you think you could drop down a group and accompany this little 11-year-old lad. He’s just joined the club, doesn’t know anyone and plays off 18.’

Dressed immaculately, playing with full sized bats, lugging a trolley and staring at me innocently to be his golf buddy, I couldn’t possibly turn him down, especially after he’d offered me a peanut butter sandwich on the putting green.

Four hours later, I was offering him a glove to sign.

Rising English star Tom Berry, who is currently studying and working hard on his game at San Diego State University - where he graduates in May 2013 - believes the work he has undertaken in America can help pave the way to a future career on the European Tour.

“I am extremely confident about making the European Tour,” said the 21-year-old from New Haw, Surrey, who is planning on attending European Tour Q-School in September next year.

“It’s definitely a dream of mine. Everything I’ve done and played in as an amateur and studying in the US has helped me learn about myself, my game and progress to the level I need to be at.

“I am also considering PGA Tour Q-School, too. To have status on one of these Tours would be awesome.

“Next year is very important for me as it will be my final year as an amateur and there is Walker Cup selection in August. It really would be amazing to represent Great Britain & Ireland.

“I feel like my game is moving in the right direction and hopefully peaking at the right time.”

The game certainly appears in fine fettle following a tie for second in last week’s Berkshire Trophy behind good friend and county teammate Josh White. Berry fired rounds of 71, 69, 71 and 70 at The Berkshire Golf Club to finish 6-under and just one shot behind his compatriot.

“My game is getting there. I have a few things to work on with my technique but am managing my game well and thinking better on the course, which is enabling me to score well like I did at The Berkshire,” added Berry, who has made seven top-20s and three top-10s in the space of nine months, as well as finishing in a respectable 39th in the recent British Amateur.

“I was also really proud to help San Diego Aztecs finish fourth in the Nationals recently. That’s the furthest we’ve got in school history, so it was good be apart of it.”

Back home in England for summer, Berry, who now plays off +2.5, is targeting a strong performance in Open Final qualifying on July 3 - having come through Open regional qualifying with a score of 1-under at Hankley Common - before heading to the English Amateur and European Amateur in August.

Yet rather than focussing on lifting silverware, which he admits is very much at the top of his radar, the Wentworth-attached star believes it’s more important to take one shot at a time.

“My goals for this year relate to process goals rather than outcome goals, for example, committing 100% to every shot giving it my full focus because I know I can pull any shot off if I put my mind too it.

“I’m also trying to become very target focused in my pre-shot routine and address over the ball, while keeping my swing thoughts simple.

“In terms of outcome goals, a win would be nice. I have been knocking on the door for the last few months and would love for it to open soon.”

Know any up-and-coming youngsters from your club? Tell us about them on in the forum, via @Golfmagic or on our Facebook page.