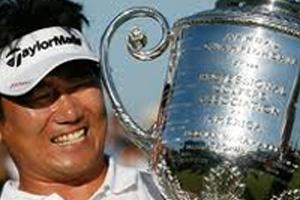 The fourth Major of the season – the 92nd PGA Championship – is upon us. And a Major it is – yessiree! – no doubt about it.

The PGA tournament is run by the Professional Golf Association of America (the clue is in the name). Traditionally a few US-based club pros can get into the tournament through a qualifying competition, but there are no amateurs – which is unique among the Majors.

Forget all that cries of “there’s no distinctive feature”, or, “it should go back to matchplay”, this is a great tournament. And here’s just three reasons why:

The PGA Championship was the first US Major to start inviting lots of foreign players back in the 80s, when only a handful could get into the US Open or the Masters.

More recently, it was the first to invite all the top 100 in the World Rankings, ensuring it the strongest field, in those terms, of any of the Majors.

You will find some (idiotic) UK commentators complaining that “nobodies” win this tournament too often for it to be a Major. This is a diabolical load of rubbish that fails to stand up to any scrutiny whatsoever.

In the last 42 years, since it became a strokeplay tournament for the TV era, it has been won 30 times by multiple Major winners.

The other 12 include players such as Davis Love, Lanny Wadkins, David Toms, Paul Azinger, Hal Sutton and John Mahaffey, who were all amongst the top players of their era and contended in many other Majors.

By way of contrast, over the same period, our Open championship has been won by 16 players who have not won another Major. So there, for every Mark Brooks there is an Ian Baker-Finch.

In 2004, Vijay Singh won in a play-off from Justin Leonard and Chris di Marco, with a score of -8 for the tournament, despite taking his foot off the gas big time on the last day with a +4 round that allowed the others in.

Article continues with a look at the course and this year's tournament overview.