Rules debate: Pettersson incident another slap in the face for common sense

No advantage gained, but penalty costs Swede nearly half a million dollars 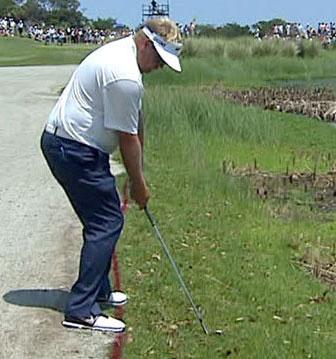 Another week. Another two-stroke penalty for breaking an overly-officious rule.

Why is it okay to repair pitch marks but not spike marks? Why can’t you take a drop from the fairway when finding a divot after hitting an accurate drive? Why are television viewers allowed to act as match referees? We've discussed them all to death.

And during the PGA Championship coverage on Sunday, we were able to add another to our list of controversial rules: Why is it fair that you should receive a two-shot penalty for disturbing a dead leaf?

Just writing it down makes it seem so much more ridiculous.

The man in question, Carl Pettersson, hit his tee shot on the first hole at Kiawah Island into the lateral water hazard to the right of the fairway. It was a poor shot, given there was plenty of the room to the left, and he deserved to find trouble. Only not in the manner that ensued.

Before taking his approach shot, the Swede asked the walking official Brad Gregory - the man who informed Dustin Johnson of the bad news at the 72nd hole of the 2010 PGA Championship - if he was allowed to touch the grass in the hazard with his club, prior to the stroke.

“Go ahead, Carl,” he replied. “Just don’t ground your club in the hazard.”

Taking all due care to avoid grounding his club, in making his backswing, Pettersson’s club apparently brushed the grass behind the ball - not a breach - and at the same time moved a leaf - a loose impediment - in breach of the dastardly Rule 13-4c.

“I double checked with the official to make sure I could brush the grass as long as I didn’t put any weight on the ground with the clubhead,” Pettersson said after the round.

“I wish he would have mentioned the leaves, too. I was just trying to hit the ball. I didn’t even think twice about it.”

Pettersson accepted the punishment, but not its rationale.

“I’ve got to take it on the chin, obviously. I broke the rule there,” added the five-time PGA Tour champion.

“I don’t think it affected the outcome of the shot. It’s just one of those things. We have a lot of stupid rules in golf.”

Although the two-shot penalty - turning a par into a double-bogey six - didn’t deny him his maiden major title due to the brilliance of Rory McIlroy, it did cost him the small sum of $480,500 as he would have finished solo second instead of tied third with four others.

“Yeah the ruling sucked for me, as I would have finished second on my own,” he added, after finishing nine strokes behind eventual champion McIlroy.

“I played good enough on the front nine, though. Who knows what would have happened?”

The 34-year-old wasn’t informed of the penalty until driving off the fourth, as the PGA of America needed two extra holes to scrutinise every possible angle from the TV broadcaster to see if a dead leaf was made even deader.

Once learning of his fate, the laidback Swede took off his cap, wiped his brow and bounced back superbly with three birdies on his next five holes before stumbling home to finish in a logjam tie on 4-under.

The rules exist in their present form and Pettersson, by the book, was correctly docked two shots. But there has to be some form of common sense employed in our beautiful game. There are far too many complicated rules for the average golfer, let alone the everyday pro.

There was no advantage gained and zero impact on the game itself during that first hole at Kiawah Island. Just let it go, officials! (Though my cynical side says this served him right after he was seen taking a club’s length drop with his broom putter earlier in the week.)

But that’s for another day...

Do you agree? Is this rule spoiling the game? Tell us of times you've fallen foul of ridiculous golf rules in the forum, via @Golfmagic or on our Facebook page.