Aussie has a horror show on the 12th 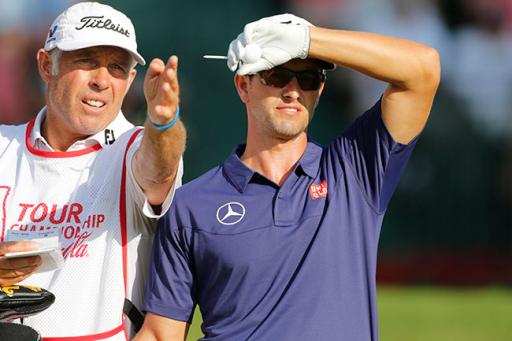 ADAM SCOTT carded a quintuple-bogey in his first round at the World Cup of Golf in Melbourne today.

The World No.2 carded a nine on the par-4 twelfth to dent Australia’s chances of winning the competition on home soil.

He finished on +4 but his teammate, Jason Day, faired better shooting -3 at a pristine Royal Melbourne.

Many thought Day would pull out of the competition after he lost eight relatives in Typhoon Haiyan but the 27-year-old courageously teed it up.

Scott's disastrous hole began on the tee when his drive went way right. Scott's provisional drive ended up even worse and unplayable, forcing him to tee up a third time where he found light rough with what was officially his fifth shot.

The reigning green jacket holder then missed the green over the back with his approach (his sixth shot), chipped on with his seventh and then two-putted.

"Just a couple of lazy swings today on 12 and I paid the price," Scott said. "I was just away with the fairies on that hole.

"It's golf, it's going to happen. You just can't play good all the time. If I can plug away at it I'll maybe claw my way back into it."

The best rounds of the day were posted by Denmark’s Thomas Bjorn and America’s Kevin Streelman who both carded -5. England's Danny Willett finished on -2 while his partner Chris Wood shot +4.

Denmark and America are leading the competition on -5 while Australia trail on +1. England are on +2.

Perhaps Scott had one eye on the cricket...