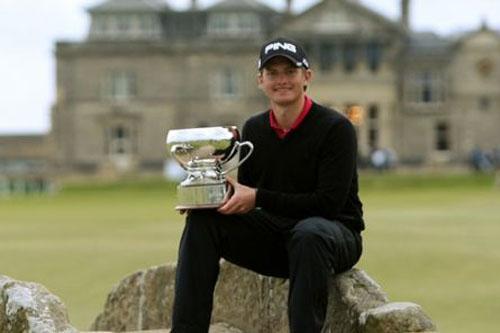 Sir Nick Faldo was among the first to congratulate Tom Lewis on winning Europe's premier amateur strokeplay event - the St Andrews Links Trophy over the Old Course at the weekend.

Lewis is a member of Welwyn Garden City Golf Club in Hertfordshire, where Sir Nick, a promising swimmer in his teens, chose golf as the sport where he felt he could make most impact. A handful of lessons from the assistant pro set him on the right path

After the 20 year-old Lewis, the British and English boys champion, posted closing rounds of 70 and 67 to record a four shot victory, Sir Nick tweeted: “Congrats to WGC’s Tom Lewis, on winning St Andrews Links Trophy..sites now on Open 2015! See you around town. Cheers.”

We'll forgive the six times major champion the spelling error (sights) - it's the thought that counts from a legend who played junior golf with Tom father Brian at Welwyn.

Lewis came from three shots back to wipe out some bitter memories of his time on the inward half of the Old Course last year.

"I was in the lead then with seven to play and really mucked up the 12th when found one of those bunkers you can't see off the tee," said Lewis who eventually finished third.

"Yesterday I bogeyed the 16th, 17th and 18th, three-putting them all, and this morning I bogeyed the 16th and doubled the 17th, so although I knew I was in the lead I wasn't looking forward to the final stretch at all," recalled Lewis, whose run of five birdies in six holes from the long fifth had taken him clear in the lead, despite breezy conditions.

"I hit into the Road Bunker at the 17th but that was the only trap I found all week, and a bogey turned out to be okay there."

Lewis, whose girlfriend Lara Cornell caddied for him, added, "It's a really big tournament to win. This is third year in a row I have played here and I enjoy these courses. You have to try and go right on the Old Course to get the best angles for approaching the greens but you have to avoid the bunkers.

He now has his sights set on Walker Cup selection this year having finished joint second in the recent Lytham Trophy.