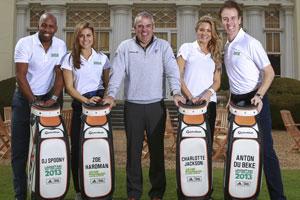 Golfmagic played 72 holes in one day for charity 12 months ago. This year, we’re going for 28 more as part of the Macmillan Longest Day Golf Challenge.

The Longest Day Golf Challenge, in partnership with adidas Golf, is asking golfers of all ages and abilities to take on 72 holes of golf in one day and help raise money for people affected by cancer.

But after attending the official launch with 2014 European Ryder Cup captain Paul McGinley at Stoke Park this week, Golfmagic will be going the extra mile when joining the adidas Golf team and a number of celebrities, including Charlotte Jackson and Anton Du Beke, by playing 100 holes in one day on June 25.

I know first hand just how invaluable Macmillan’s work is, so why not show what you’re made of and sign up today.

The challenge can be completed on four different courses or the same course four times in one day.

And to add to the excitement, the top four teams that complete the challenge will go on to compete for the coveted 2013 Longest Day Challenge Cup, with the final taking place at the sun-kissed Boavista Golf Resort in Portugal in October.

Macmillan provides invaluable therapists, nurses, benefits advisors and support line workers who make sure people living with cancer have the best team in their corner and no one has to face cancer alone.

“We want to leverage all of our customer and media relationships to create as much awareness as possible to ensure a record number of teams sign up,” said adidas Golf’s brand director Greg Pearse.

“It’s a fantastic opportunity for golfers across the UK to unite behind a great initiative and raise lots of money for this incredible charity.”

In 2012, more than 500 teams took part in the challenge and raised more than £560,000 for Macmillan Cancer Support. This year the aim is to smash that total and raise £1million for people affected by cancer.

What better way to fundraise for a worthy cause than by spending a summer’s day out on the course? If you want to be a hero, sign your team up today here.

If you would like to sponsor the Golfmagic team, please click here. You can also TEXT PARS72 £2 to 70070 (ensure there is a space between the PARS72 and £2).

Click here for our exclusive interview with Charlotte Jackson.