Six-time major winner, who has known McIlroy since he was 12, insists the pair are good friends 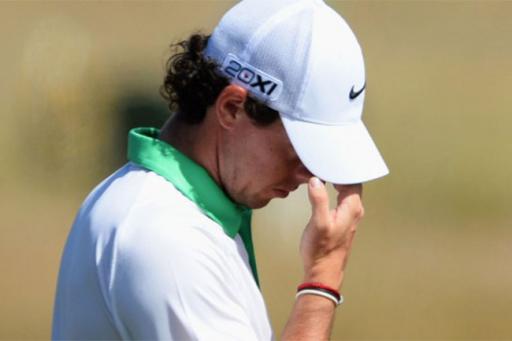 Earlier this week, Faldo said McIlroy needed to focus more on golf but the Ulsterman replied explaining his slump is just a part of being a sportsman. Fellow Nike-staffer Tiger Woods also rushed to back the 24-year-old as did Phil Mickelson.

Faldo said: “I’m like a big granddad saying these things. I’m trying to give him a little caring, loving help. I’m not trying to be vindicated. I like the kid. He’s a friend. I can speak from experience.

“All I’m trying to say is I’ve been there, seen it, I know what can happen.The equipment change he did was always going to be very dangerous. If you can do it on a Sunday afternoon at a Major and win it, it gives you confidence in this game.

“I guarantee he’s different. He looks a different person, let alone a different golfer right now. When I saw him before the US PGA I said to him ‘how are you playing?’ he said ‘every part of my game is good, or better than good.’ He wouldn’t say that now, would he?

“But golf, like life, goes up and down. As long as you keep believing you’re on an upward track, your career is still going to be up and down. That’s golf.”

The Open: updated exemptions confirmed for The 149th Open at Royal St George's
R&A reveal Open Championship venues for 2023 and 2024

Faldo, a six-time major winner including three Opens, has known McIlroy since he was 12 as he was part of his charity ‘Faldo Series’ which helps young golfers.

Faldo said: “When I say he has a window, let me just add, he’s going to have a wife and children and I’d advise him to get a charity he believes in. There is a window for charity as an athlete. When you’re a golfer, concentrate totally on your golf. Just keep it minimal.

“I’m speaking from experience. Don’t go off into the business world because he has tons of time for that. If you’re going to retire somewhere in your 40s, who knows with 10 Majors, you’ll be a pretty good businessman for the next 50 years of your life.

“That’s what I’m trying to say. I got involved in business, and I know it changed my mind-set. I’m Rory’s friend. Don’t write it any other way. I’ve known him since he was 12. He’s a big part of my Faldo Series. Just give it your full attention when you want to play golf.”