The Open: Monty to play through the pain 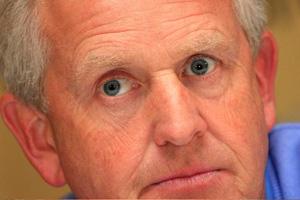 Colin Montgomerie is prepared to play through the pain barrier at next month’s Open Championships at St Andrews.

The Ryder Cup captain has been suffering with a calf muscle injury for three weeks but is desperate to play after carding a 62 at Sunningdale to qualify.

“I’ve no idea how I did it but the muscle is torn,” he said.

“The pain is all through my back and Achilles tendon, but after a 62 to get in I don’t want to miss out.”

Despite the niggling injuries, the 47-year-old, who has not won a title since the European Open in July 2007, recorded a second round score of 68 at the BMW International in Munich to reach a halfway total of six under par.

The Scotsman, who played thanks to painkillers, headed straight to the physiotherapy wagon.

“I’ve been seeing Germany’s under-21 football team doctor; his boss is in South Africa, of course,” he added.

“He’s been very helpful because he’s used to dealing with footballers who have this type of injury.”