In the second part of our exclusive Tom discusses Hogan's secrets 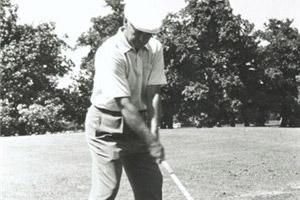 Tom Stites is Nike's head of product creation and has made golf clubs for some of the greatest legends in the game, including Ben Hogan and Tiger Woods. He has given his valuable time, exclusively to Golfmagic.com forum members, to answer their questions. In this, the second of a series of articles, he reveals his dealings with master golfer and master craftsman Ben Hogan and some of the problems he has overcome designing equipment for club golfers - even the disabled.

Each forum member whose question is answered will receive a sleeve of the latest Nike Crush balls.

‘You worked with Ben Hogan in your early years as an engineer and club designer. What would he have made of today’s equipment including adjustable driver heads, interchangeable weights and faces and wedges on putters, etc?’ - Baldster

Well, Baldster, (I take it that's your Golfmagic forum nickname) I don’t think there’s any doubt having worked closely with Mr. Hogan that he would be very impressed with the level of manufacturing precision that we have today.  In the old days, when I knew him, we dealt with very large variances in the manufacturing process, so I know he would be impressed by that.

He was also much more progressive than people would think or give him credit for.  We were constantly working on very aggressive kinds of designs to help average golfers, he was extremely focussed on the Hogan ratio, which was a very low centre of gravity; a back-centred gravity weight golf club.  So he understood the inertial aspects of the physics of club design but he was the world’s greatest player at that particular point or had been and he knew that people needed to have fun and be able to play better.

I think he would be extremely happy with and impressed by some of the game improvement golf clubs that are out now. I know that our product at Nike today will always have some element of better players’ performance and better players’ looks for the more skills type player, so we’re going to continue to make products that I think he would be proud of, too.  I think of him constantly, he drives a lot of what I learned as an early engineer and a designer in the game.

‘What was Hogan’s secret?’ - Just Pured

I got a chance to work with Mr Hogan for a number of years and he never shared with me what exactly was the secret that he referred to to the rest of the world. But he did talk about the dirt a lot and I think the best I can say is that he was an extremely hard worker. He hit balls every day and he felt like  hitting balls every day.

He said several times that if he didn’t get a chance to practice he fell backwards, and that to improve was the best part of the game.  So, I think it was just his work ethic or he literally got dirty, he got in the dirt and he worked hard and I think it’s the same kind of ethic that if anyone chooses to practice and follow, they’re going to be successful in life. So I don’t think there was any one secret or all the different things that people have speculated.  That is just my opinion from having worked with the man but I have no proof of that.

‘What is the most interesting problem that you have had to overcome during any of your club designs?  Are there any designs that have been made to suit a specific purpose such as a disabled player?’ - Jay-Jay

Many years ago when my son, Jake, was 10 years old, he got interested in the game, so I started looking at all the clubs in the set.  I’d been designing clubs for about 10 years at that point and started looking at the different options that I could put him in as my son.  And I wasn’t satisfied with any one model that had enough of the technology that I would like for him to start off with, so that he could have a good experience.

I started developing a prototype that 10 years later actually became the original Nike Slingshot. I’ve got to say that one was probably the biggest labour of love that eventually became a product that everyone could have fun with and enjoy the game.

The things that we learn during the physics lessons that became that prototype for Jake and eventually the Slingshot are now found in our existing Nike Slingshot and have transferred over to the base performance portions of our new Machspeed irons. So, that particular learning curve continues to go forward and improve each year and it really was a lot of fun.

In the last two or three years, I started working with some of the disabled veterans that have been coming back from the Gulf War and helping them with some prosthesis adaptions for the grips and to build some golf clubs that will allow them to stay in the game. And that has been really fun and rewarding. I’m working with a kid now that lost most of both of his hands and we’re building some special industrial velcro type grips and gloves that allow him to hang onto the club.

He doesn’t have any grip pressure anymore but we’re kind of latching him to the clubs and he’s a big strong kid who's quite athletic and he’s finding a new game. So yes, we do other things than just make clubs for the pro guys in our research group at 'The Oven' in Fort Worth.

I don’t think there’s any doubt having worked closely with Mr. Hogan that he would be very impressed with the level of manufacturing precision that we have today.