Vandalism continues across the country 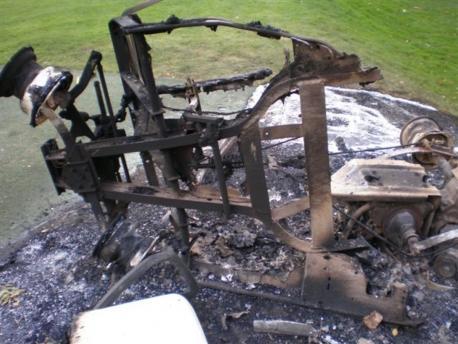 The course on Wood Farm Road, Malver Wells, had three buggies stolen from its shed before the thieves set alight one of them and caused extensive damage to much of the course.

Club secretary Terry Smith told the Malvern Gazette: "This was the second time the shed had been broken into in the space of a week, although nothing had been taken the first time. This time they managed to take them out and completely write-off two of them."

“One of the buggies was set alight while the roof was smashed off another. The third ended up in a pond. All that’s left of one of them is an engine and some bits of metal.

“They even chucked a memorial bench for one of our members on the fire to get it going.

Golf Vandalism has been rife across England this year with putting green's damaged at Moss Valley Golf Club while other trespassers have written messages across a golf course in Darlington.

“Maybe this might stir the conscience of a few parents who might think about where their little brats were that night,” he added.

“We’re very concerned about it. Frankly we’d like it to stop. We’ve stepped up the security so this won’t happen again.”