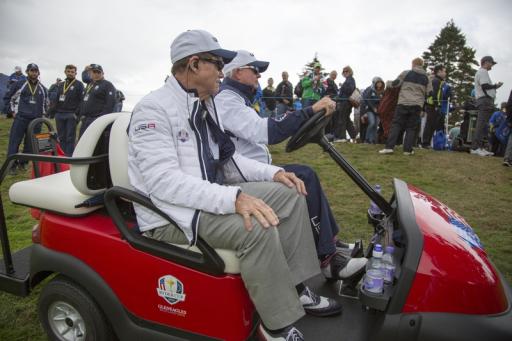 TOM WATSON is taking responsibility for the United States' 16.5-11.5 loss to Europe at the Ryder Cup at Gleneagles.

The American captain has come under heavy criticism since the tournament, with Phil Mickelson at the forefront of the mud-throwing.

"I take complete and full responsibility for my communication,” Watson told Sky Sports.

“And I regret that my words may have made the players feel that I didn't appreciate their commitment and dedication to winning the Ryder Cup.

"My intentions throughout my term as captain were both to inspire and to be honest. As for Phil's comments, I completely understand his reaction in the moment.

"Earlier this week I had an open and candid conversation with him and it ended with a better understanding of each other's perspectives.

"Phil's heart and intentions for our Team's success have always been in the right place. Phil is a great player, has great passion, and I admire what he's done for golf.

"The bottom line is this. I was their captain. In hindsight, whatever mistakes that were made were mine and I take complete and full responsibility for them.

"I want to say again to the players, their families, the PGA and our country, how proud and honoured I was to captain this talented group of golfers, and how privileged I was to spend the past two years working this labour of my love for the Ryder Cup."

Watson added: “The guys gave everything. They played their hearts out, I was proud to get to know each and every one of them. I know they are all going to win tournaments, be on future Ryder Cup teams, and have wonderful careers.

"Our team certainly showed guts when it took it to the other team early in Sunday's singles matches. We were indeed tied with them as the scoreboard turned wonderfully 'red'.

"Our players started fast, as I had asked them to in my comments the night before. I asked them to really concentrate on holes two to five, as the Europeans had won too many early battles on these particular holes.

"But, in the end, the facts are that the other team played better. My hat's off and congratulations to them."