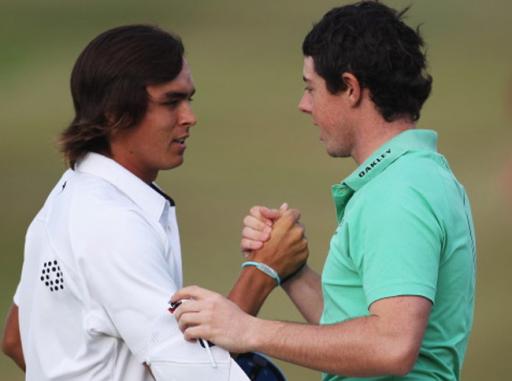 After more than 250,000 votes in 35 countries across the globe, young guns Rory McIlroy and Rickie Fowler were chosen to partner Tiger Woods on the cover of the next edition of EA Sports’ PGA Tour Golf series.

Their victories come on the heels of a three week voting contest that sparked debates amongst golf enthusiasts and campaigning by the world’s top golfers through their personal social media channels, including Twitter and Facebook.

In the voting to determine who would partner Woods on the European edition of the game, McIlroy defeated Luke Donald in the final with 54% of the votes.

Stateside, Fowler locked horns with Bubba Watson, with the youngster pipping his good friend 52% to 42%.

It will be McIlroy’s second appearance on the franchise after making his debut two years ago – the first time Woods wasn’t alone on the cover art in the wake of the shenanigans in his personal life.

But it still remains a huge honour for both successful golfers.

“Appearing on the cover of Tiger Woods PGA Tour 11 was an amazing experience and helped introduce me to a whole new fan base around the world,” said US Open champion McIlroy. “But this year holds special meaning because it was the fans who decided to put me on the cover once again.”

Added Fowler: “For someone that grew up playing Tiger Woods PGA Tour and is a huge fan of the franchise, this is a great moment in my career.

“I’m excited to join Tiger on the cover of this year’s game and want to especially thank all of my fans who spread the word and voted for me.”

Woods himself, meanwhile, had this to say: “There have been a number of great young and up-and-coming golfers to join the sport over the last few years and Rickie Fowler and Rory McIlroy are certainly on that list.

“Their wins are a testament to their passionate fan base and I’m looking forward to having Rickie and Rory join me on the cover of Tiger Woods PGA Tour 13.”