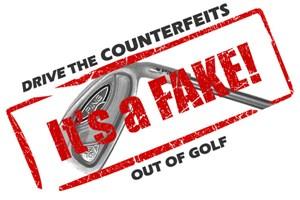 Golfmagic is leading a campaign to ‘Drive the Counterfeits out of Golf’ and help the major brands, police, and trading standards to eradicate fake equipment.

We want our members to help, too, by passing on their experiences, but in the first of our special features we visited PING Europe to see what it is doing to eradicate the problem and why it sees consumer education as the answer.

Virtually every golf item made by PING has been subject to counterfeit - from fake Anser putters to reproductions of the latest G20 drivers. Imitation hats, head covers and umbrellas have been produced, while even spurious ball markers and tees have been copied and sold under its brand name.

Such activity costs the golf industry more than $2million in lost revenue in the United States alone and at its headquarters in Gainsborough, Lincolnshire, PING Europe is working hard to help prevent golfers being duped by sham operators claiming to sell authentic products.

So when Golfmagic advised PING that it was introducing its ‘Drive the Counterfeits Out of Golf’ campaign to stop the illegal trade in fake equipment, its managing director for Europe, John Clark, was delighted to put the company squarely behind our initiative.

“It’s a really good thing for the industry,” he said. “From time to time you get the odd article but certainly no concerted effort nor campaign. It’s becoming a bigger and bigger issue for us to deal with and any help your Golfmagic members can give us will be greatly appreciated.”

He revealed that PING’s anti-counterfeiting department in the UK has identified 159 current ‘suspect’ websites where fake PING equipment is being sold as genuine. Five have been closed and 12 have moved and changed their domain name.

On average, says John, the company requests the deletion of ten counterfeit items every week from auction-type websites and over the past five years it has made more than 2,500 similar requests about equipment purporting to carry the PING name.

“We currently receive around 40 contacts every month from golfers asking questions about counterfeit products and we make 15-20 checks every day on behalf of our customers to see if the serial numbers on equipment they’ve bought are genuine,” he said. “In addition, police and trading standards get in touch two or three times a month following up complaints from the public about counterfeit equipment.”